Why does Coca-Cola Zero Sugar Contain Sodium Despite no Sodium Ingredients?

According to the Coca-Cola website and every label I read, Coca-Cola Zero Sugar is a mixture of organic compounds:

The label also says 40 mg sodium. There's a perceptible salty taste in the beverage, which suggests to me that something activates the taste receptors for saltiness, but a potassium cation can do that just fine.

There is no sodium in any of those molecules. That means "Natural Flavors" must contain the sodium... but in what form? The essential oils in things like OpenCola seem to all be hydrocarbons without sodium. And if it's plain old NaCl table salt, why wouldn't they just list it as "salt"?

Where's the sodium in Coke coming from?

EDIT: The discussion has centered around the sodium content of "still" drinking water; what about the process of carbonating the water? Some processes add a sodium carbonate to the solution; could that be the source, contained in the ingredients list as "carbonated water"?

According to the Wisconsin department of healt natural sodium levels in water is $\pu{40-60 mg/L}$ meaning a $\pu{20 fl oz (\! 591 mL)}$ Coke has about $\pu{25 mg}$ of sodium from water. Thus the other $\pu{50 mg}$ of sodium must come from natural flavors. This makes sense since Coca-Cola uses plant products like coca leaves which would naturally add sodium to the carbonated sugar water.

Basically, the Sodium could come from any or all of the ingredients used to manufacture Coca Cola. The ingredients list is based on the raw-materials used in the product, but these ingredients are not necessarily pure, even if they are Food Grade. As an example: The Phosphoric acid used is probably a 75% H3PO4, a common commodity in the industry, but the remaining 25% is not pure water. It may contain a number of impurities and by-products, such as Sodium, but as long as they are considered harmless they will not be listed anywhere.

The Sodium-content in the Cola, is on the other hand based on an actual analysis of the final product (at some point during product development).

Note that this doesn't mean Coca-Cola typically contains 40 mg sodium per serving. Instead, that's likely an upper limit designed so that, with normal variation, the product will still be in compliance.

Here's a screenshot from FDA's website (https://www.fda.gov/food/guidanceregulation/guidancedocumentsregulatoryinformation/labelingnutrition/ucm063113.htm) showing an example of how this might be done for sodium. Note that the mean, found from an analysis of 96 samples, is 95.81 mg per serving. However, based on the stdev, a one-sided 95% prediction interval estimates that (within this interval) the maximum amount of sodium would be 120 mg/serving, so that's what is listed on the label. Given this, the product would be considered in compliance if the actual amount of sodium is <= 144 mg/serving. 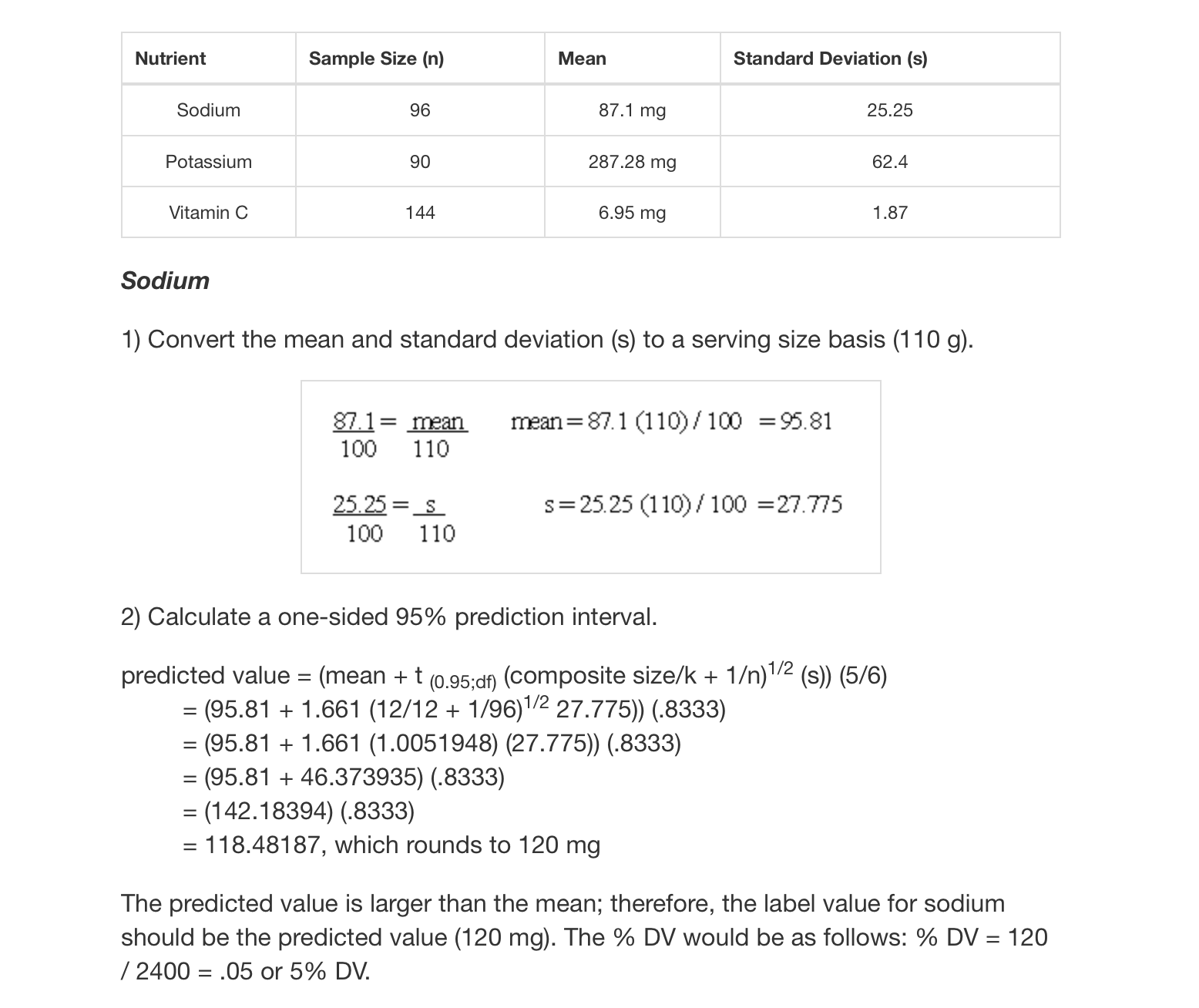 Not the answer you're looking for? Browse other questions tagged ionic-compounds food-chemistry mixtures or ask your own question.

1
Why does gold react with cyanide and sodium hydroxide
6
Why does sweetening milk need less sugar as compared to tea?
48
Why is the recipe of Coca Cola still a secret?
21
Why does brown sugar have a strong smell but white sugar doesn't?
0
Can a drink with such composition have 0 caloric value (whether manufacturer lied)?