In discussions of the Arrhenius equation describing how rates change with temperature, there is often a reference to collision theory.

In the Arrhenius equation,

there is a Boltzmann factor interpreted as the fraction of collisions of sufficient energy to overcome the activation barrier. If you plot the Boltzmann factor $\mathrm e^{-E_\mathrm{A}/RT}$ against temperature, it looks like a simple exponential decay (all quantities in the exponent are positive). However, most textbooks use a graph of the Maxwell–Boltzmann distribution (i.e. distribution of speeds of gas molecules), which is not a simple exponential decay but has a maximum near the average speed.

So how is a graph of the Maxwell–Boltzmann distribution relevant to the Arrhenius equation?

Rationale for posting an "answer" to my own question

[Comment from OP] I’m looking for an explanation and a graph that is better than what is currently in the first year college textbooks .

The comments to the question contain some excellent insight and references but there is no comprehensive answer to far, so I am collecting what was posted here. Maybe the depth of the comments and the lack of a highly rated answer reflects that it is impossible (at the first year undergraduate level at least) to make a meaningful quantitative connection between Maxwell-Boltzmann distribution of kinetic energy in a ideal gas on the one hand and the Arrhenius equation on the other hand.

Textbook treatment of the question

In first-year college textbooks, the Arrhenius equation is often rationalized for gas phase reactions via the collision theory. The quotes here are from OpenStax Chemistry as hosted by Libretext.org, but other textbooks have similar material:

Both postulates of the collision theory of reaction rates are accommodated in the Arrhenius equation. The frequency factor A is related to the rate at which collisions having the correct orientation occur. The exponential term, $e^{−E_a/RT}$, is related to the fraction of collisions providing adequate energy to overcome the activation barrier of the reaction.

This is great because it references collisions providing sufficient energy.

Then they go on to explain:

The Arrhenius equation (Equation 12.5.6) describes quantitatively much of what we have already discussed about reaction rates. For two reactions at the same temperature, the reaction with the higher activation energy has the lower rate constant and the slower rate. The larger value of $E_a$ results in a smaller value for $e^{−E_a/RT}$, reflecting the smaller fraction of molecules with enough energy to react. Alternatively, the reaction with the smaller $E_a$ has a larger fraction of molecules with enough energy to react. This will be reflected as a larger value of $e^{−E_a/RT}$, a larger rate constant, and a faster rate for the reaction.

This is pretty much correct if you don't over-interpret "fraction of molecules with enough energy to react". What is relevant is the energy made available by collisions, not the energy of the molecules, but if the molecules have higher kinetic energy, the collisions will be of higher energy. (There might be some energy associated with rotation and vibration, but since collision theory starts with a mono-atomic ideal gas and we are shooting for the simplest explanation, those will be ignored).

Then they show a figure (and this figure is fairly representative of the corresponding figures in other textbooks and those found online from various sources): 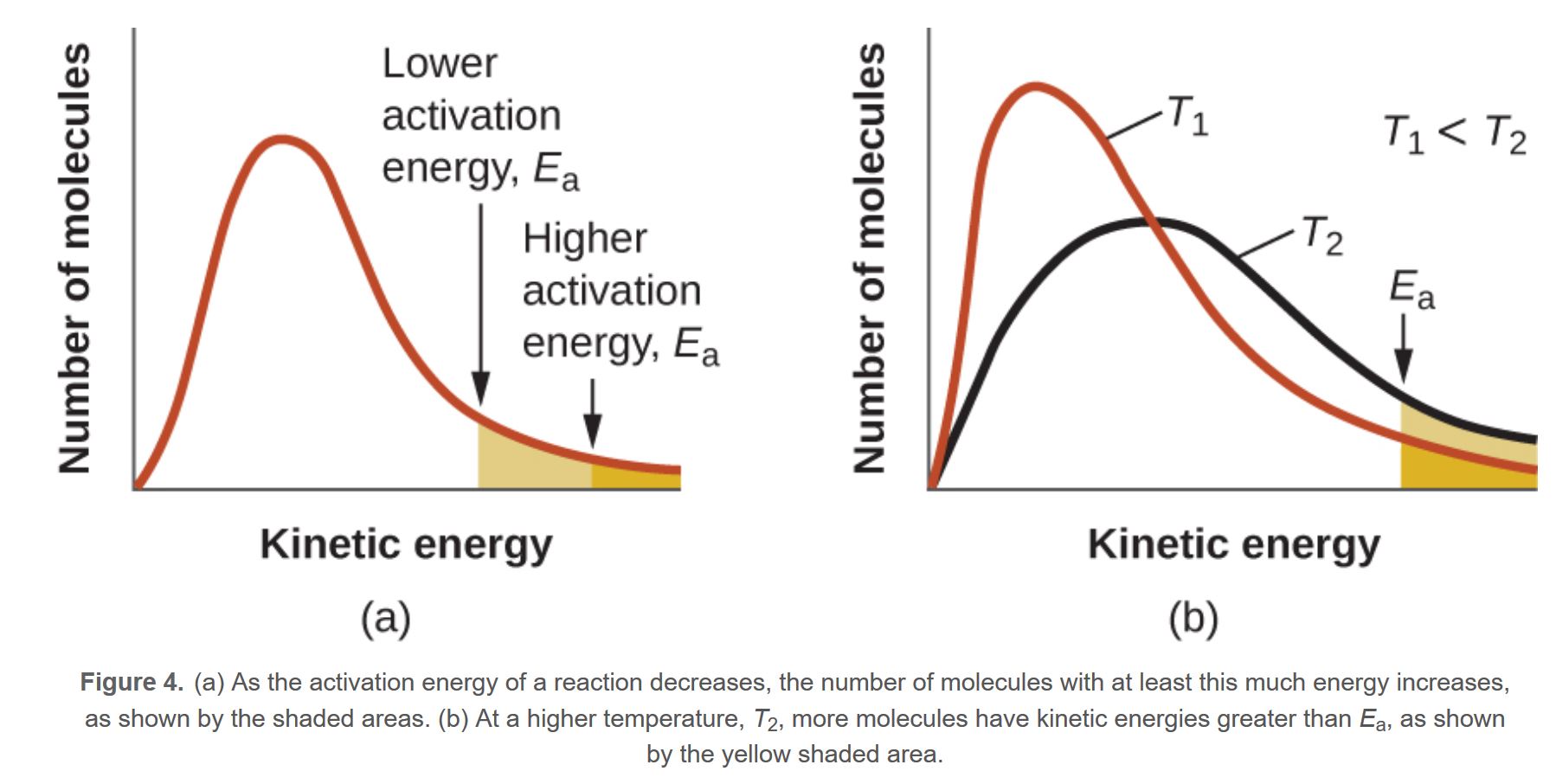 This figure suggests that the fraction of molecules with kinetic energy higher than the activation energy will react. It also suggests that if you integrate over the shaded area, you get the Arrhenius equation.

If you take a close look at the curve, you will see that the slope at the origin is too small. It looks like the x-axis is the velocity rather than the energy, and the graph is accordingly distorted.

As an aside, there are two aspects of this figure that are not representative of what first-year students will experience and observe in the lab.

The comments were very insightful. Ivan Neretin addressed the relevant degrees of freedom:

When the particles are about to react, in fact you are only interested in the distribution of one component of the velocity vector (say, vx). This distribution is a simple exponential decay.

I made a diagram to illustrate what happens in an inelastic collision: 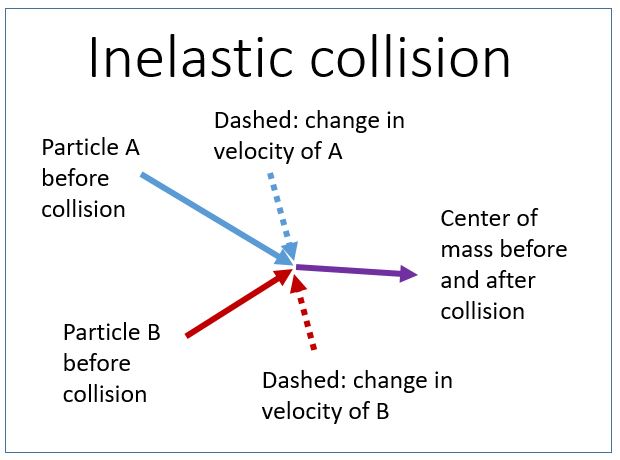 The wikipedia article on the Maxwell–Boltzmann distribution states:

Since the energy is proportional to the sum of the squares of the three normally distributed momentum components, this distribution is a gamma distribution; in particular, it is a chi-squared distribution with three degrees of freedom.

Orthocresol gave a reference to the rigorous derivation of the Arrhenius equation from the Maxwell-Boltzmann distribution in one of his comments:

The TL;DR is that porphyrin's first comment is pretty much correct, the area under the graph does generate an exp(−E/kT) form, although the maths is slightly more nuanced than simply doing the integral from EA to +∞.

In this answer, orthocresol sketches the derivation, with two references that show the details.

Relevance to teaching at the first-year college level

Most reactions students will see and do will be in solution, where things are different than in the gas phase, but the Arrhenius equation still is a good description of rate vs. temperature. On the other hand, as porphyrin state in one of his comments, things are usually more complicated than a derivation of rates vs. temperature via the collision model suggests:

The Arrhenius eqn is only a v crude model, sure molecules have to collide in the correct way, even if this is inline the wrong part may still collide depending on the molecule's size. Also vibrational energy can aide or impede collisions even if every thing else is ok. Have a look at RRKM, Tolman's stat mech model or better still Kramer's model of reactions.

So maybe it is best to treat the Arrhenius equation as a definition of the activation energy in an empirical sense.

A graph to illustrate collision energy distribution at multiple temperatures might be helpful.

Following the logic of deriving the Arrhenius equation from the collision model, this would simply be a graph of $e^{−E_a/RT}$ at different temperatures. For values of temperature relevant to first year experiments (eg. room temperature vs water bath), the two traces would be very close to each other, and almost zero at energies equal to a typical activation energy obtained in a first year lab (e.g. 80 kJ/mol for iodination of acetone). To see anything, you have to add an inset zooming in near the activation energy of interest.

This graph is very different from the textbook graph. It shows the distribution of collision energies rather than the kinetic energy of individual particles, and the two temperatures chosen are explicitly given and more relevant to an undergraduate lab experience. It shows that the energy distribution is not so different between room temperature and body temperature (the average energy of a molecule is proportional to T, after all, and this is just a 6% difference in temperature). However, at typical activation energies (insets at 40 kJ/mol and 80 kJ/mol), this smaller difference results in a large difference in rate constants. It also shows that of the collisions of sufficient energy, most have an energy quite close to the activation energy (fast drop-off of probability with increasing energy).

Well , the relation between the Boltzmann factor and the Maxwell distribution curves is not that intuitive.

where the term $\operatorname{e}^{\frac{-E_\text{a}}{RT}}$ represents the fraction of collisions that are effective (fraction of molecules that have sufficient energy).

If we increase the temperature, the fraction of collisions that are effective ( fraction of molecules having sufficient energy) increases exponentially.

Here the fraction of molecules is plotted against the kinetic energy at a fixed temperature $T$. Let's plot the graph at another temperature $T+ 10$ :

As we can clearly see , the fraction of molecules having kinetic energy greater than a particular value increases with the increase of temperature that is the fraction of collisions that are effective increases which is what the Boltzmann factor in the Arrhenius equation tells us.

1
Do catalysts shift equilibrium constant towards 1?