Now, just how much the energy changes is dictated by how well the atomic orbitals overlap. Overlapping depends on three things:

Now, assuming that the atomic orbitals are similar in energy and the symmetries are correct, which is the case for C and O.

The sigma bond is a result of two orbitals very close together, directly facing each other frontally. The overlap is great. The pi bond emerges from two orbitals overlapping side-by-side, which isn't as efficient because it happens at a greater distance.

Here is a pic to exemplify: 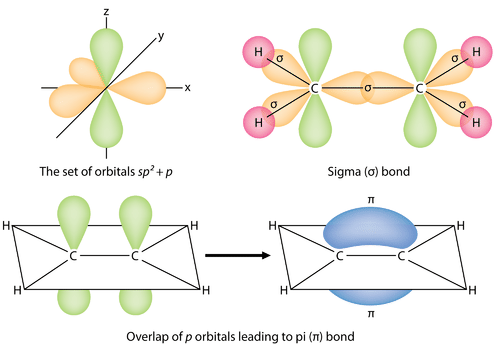 Not the answer you're looking for? Browse other questions tagged organic-chemistry molecular-orbital-theory carbonyl-compounds orbitals or ask your own question.

3
Why is there a difference between O2 and B2 sigma 2p molecular orbitals in diagrams?
6
Why do higher orbitals have more energy?
9
Why does the mixing of sigma 2s and 2p orbitals lower the energy of the sigma 2s orbital and raise the energy of the sigma 2p orbital?
2
What is the criterion for filling up of electrons in molecular orbitals of increasing energy in simple diatomic species?
2
Energy level of hybrid orbitals in the molecular orbital energy diagram
5
Why bond energy of acetone is more though it is more polar than formaldehyde?
3
According to MO theory, why is the dilithium cation more stable than the dilithium anion?