This question comes from a second semester undergraduate organic chemistry course. Please refer to the image below with regard to the question.

My understanding of the trend in section 4a is that "larger" halogens such as iodine by themselves are able to stabilize positive and negative charges better than "smaller" halogens like fluorine.

Moving into section 4b, my professor transitions with "HOWEVER", telling me that the trend in 4b is contradictory in some way to the trend in 4a.

The idea that my professor is attempting to convey still very much eludes my comprehension. So I ask: 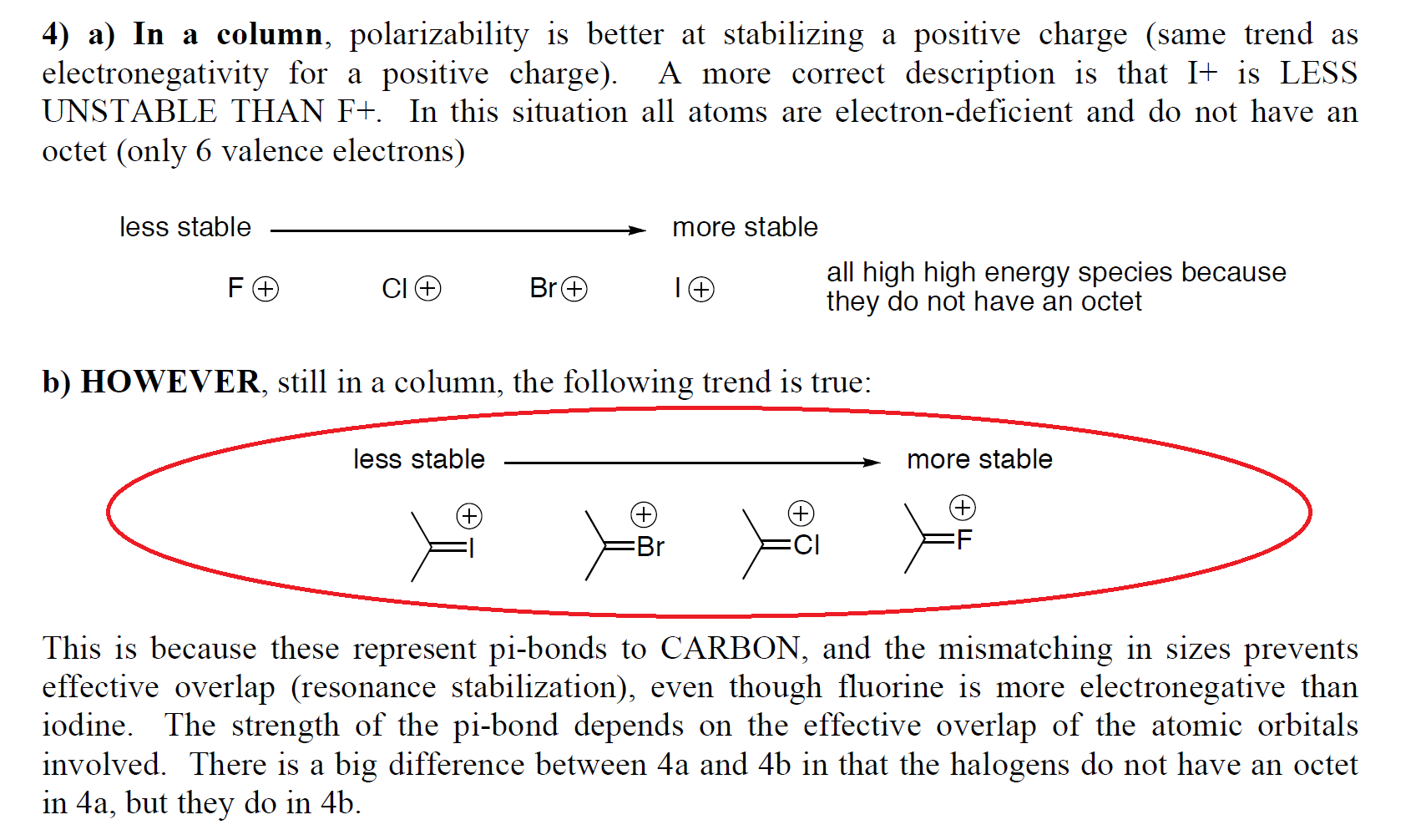 The main idea is that a cation can be stabilized by an adjacent atom mainly in two ways:

As induction stabilization works over sigma bonds, it is stronger if the bond has the correct polarization; that is, if the other atom has low electronegativity, so it holds a positive charge easily. In your example iodine would be better as explained in a).

Mesomeric stabilization occurs through pi bonds, which are significantly weaker than sigma bonds. In this case the main issue is good "contact", or overlap, between atomic orbitals. As carbon is so small, it overlaps better with small elements, so in this case fluorine has the advantage, as explained in b).

In general, mesomeric stabilisation is the main mechanism for carbocations. This happens because not only is the charge effectively spread over more than one atom, but also the electrons compromised in the pi bond lower their energy compared to just staying in the valence shell of the donor atom.

However, note that this is not the case for all elements; take for example sulphonium ions. Sulphur is a bigger atom that forms double bonds poorly. Hence the main mechanism is induction.

A good book (albeit a bit old) for reference is Morrison's Organic Chemistry.

Not the answer you're looking for? Browse other questions tagged organic-chemistry molecular-orbital-theory stability valence-bond-theory atomic-structure or ask your own question.

30
Why is the bond length of CO+ less than that of CO?
4
Why are double bonds at more substituted carbon more stable?
1
Why is bipolar resonating structure less stable than monopolar structure?
1
Why are alpha-carbonyl relatively less stable?
10
Why is isobutane more thermodynamically stable than n-butane?
0
why is tertiary carbocation more stable than primary allylic carbocation?
3
Why is the carbon monoxide triple bond stronger than the nitrogen-nitrogen triple bond?