I'm guessing this has to do with physical limitations. For example, consider a carbonyl oxygen. Oxygen is $\ce{sp^2}$ hybridized. The carbon the oxygen is bound to has already "used up" two of its four bonds. The carbon can only form two more sigma bonds in addition to the one sigma bond it already has in the $\ce{C=O}$ double bond.

But what about "hypervalent" (if there are such beasts) molecules? Here we come to a self-consistency issue. My teacher still believes in hypervalent molecules - i.e. he draws sulfuric acid with six bonds.

So let's consider sulfuric acid in its hypervalent form, with two double bonded $\ce{sp^2}$ oxygens. There are a total of six bonds and four sigma bonds, implying $\ce{sp^3}$ hybridization.

So my revised set of questions is as listed:

1) Is my teacher being inconsistent with himself here?

2) Does $\ce{sp^2}$ hybridization still imply $\ce{sp^2}$ hybridization for linked atoms? Note that sulfuric acid does not disprove my teacher's statement if we take sulfuric acid to have four bonds, not six (i.e. sulfuric acid is properly represented as charge separated due to the high ionic character of its $\ce{S-O}$ bonds. If I remember correctly, on a time-average basis, 1.7 electrons are in oxygen's valence and only 0.3 electrons are in sulfur's valence per bond.

It can be seen as a general rule of thumb, but it is not accurate. The defining feature for conjugated systems is that they have (local) planarity. This is necessary in order to form delocalised $\pi$ orbitals. The $\pi$ orbitals are antisymmetric to that defining plane, hence have to be formed at least by $\ce{p}$ orbitals.

Since all $\ce{sp^2}$ orbitals are in a plane, there are available $\ce{p}$ orbitals perpendicular to that plane for $\pi$ orbitals. The best example for this is benzene and on a larger scale graphite.

The same concept can be applied to $\ce{sp}$ orbitals. The best example might be $\ce{HC#C-C#CH}$.

And therefore a combination of both. A fantastic example for this is phenylacetylene (BP86/def-SVP only orbitals of out of plane $\pi$ symmetry no 27, 26, 24, 21).

Absolutely not, here are a few examples 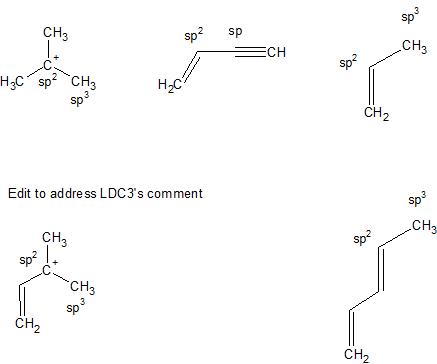 Not the answer you're looking for? Browse other questions tagged hybridization or ask your own question.