For reasons of symmetry I (without deeper chemical knowledge) supposed, that $\ce{XeF4}$ has a shape like $\ce{CH4}$. But according to Wikipedia its

crystalline structure was determined by both NMR spectroscopy and X-ray crystallography in 1963. The structure is square planar, as has been confirmed by neutron diffraction studies.

In a crystal the neighbor atoms have some influence on another and sometimes the chemical formula shows the numerical ratio between the elements but not draw the full picture of all interactions between the neighbor elements. Does the influence of the neighboring molecules in a $\ce{XeF4}$ crystal makes the square planar shap? Is it imaginable that an isolated $\ce{XeF4}$ molecule has a tetrahedral shape?

Additional question. What is the crystalline structure of $\ce{XeF4}$?

There are two single crystal-structure investigations done at room temperature, both published in 1963. Both suggest that $\ce{XeF4}$ crystallizes in monoclinic system ($P 1 2_1/n 1$) and preserves square-planar geometry in solid phase; however, the angle $\ce{F-Xe-F}$ slightly deviates from $90°$. 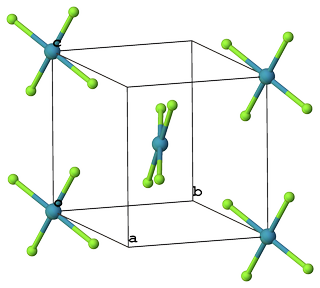 The molecule has symmetry $D_\mathrm{4h}$ within the limits of error of this study, although such symmetry is not required by the space group. The angle $\ce{F1-Xe-F2}$ is $\pu{86 ± 30°}$ and the two independent distances $\ce{Xe}$ to $\ce{F}$ do not differ significantly and have an average value of $\pu{1.92 ± 0.03 Å}$ (Fig. 1). The shortest intermolecular $\ce{F...F}$ contact is $\pu{2.95 Å}$. This and all other intermolecular distances are reasonable; the molecule fills space well, providing further confirmation of the formula $\ce{XeF4}$. Since all of the intermolecular $\ce{F...F}$ contacts in this structure exceed slightly the expected van der Waals contact of $\pu{2.7 Å}$ it is not surprising that a second phase of $\ce{XeF4}$, with a density some $10$ percent higher than that of the present structure, exists (2). The structure of this denser phase is at present unknown. 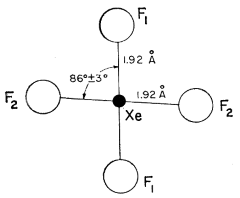 Templeton et al. [2] did a subsequent XRD experiment and presented improved crystallographic data (ICSD #26626) with $R$-factor of $8.6\%$ and stated that

The structure consists of a molecular packing of square planar molecules of $\ce{XeF4}$.

Ibers and Hamilton have deduced two structures by refinement of data with $h + k + l$ even. These data do not permit determination of the relative signs of the two $y$ coordinates. One of these two structures is in approximate agreement with our result.

13
How does the crystal know where to stop stacking the unit cells?
4
How do people check the type of defect in a crystal?
6
How can the bulky octadecyltriethoxysilane molecule promote single-crystal growth?
14
What is a stereochemically active or inactive s orbital?
4
Ice Crystal Matrix measurements of H2O molecules?
2
Is the number of tetrahedral voids always equal to double the number of octahedral voids in any crystal?
0
Distribution of molecules in a crystal