Are both $\Delta H$'s given by the above formulas equivalent?

physical-chemistry thermodynamics enthalpy
Share
Improve this question
edited May 16 '18 at 3:19

Yes. The two methods are equivalent.

If we calculate the enthalpy of the reaction through bond energies, we get the negative of the $\ce{N-N}$ bond energy. Why? Because we only formed one bond in this entire reaction. Every other bond stays the same - we start with four resonance stabilized $\ce{N-O}$ bonds and end with four resonance stabilized $\ce{N-O}$ bonds. The net change in bonds is the formation of a $\ce{N-N}$ bond. Here is a picture of the process (note that this picture doesn't show any resonance stabilization but there is; the "pi" bonding electrons are delocalized despite what the picture implies). 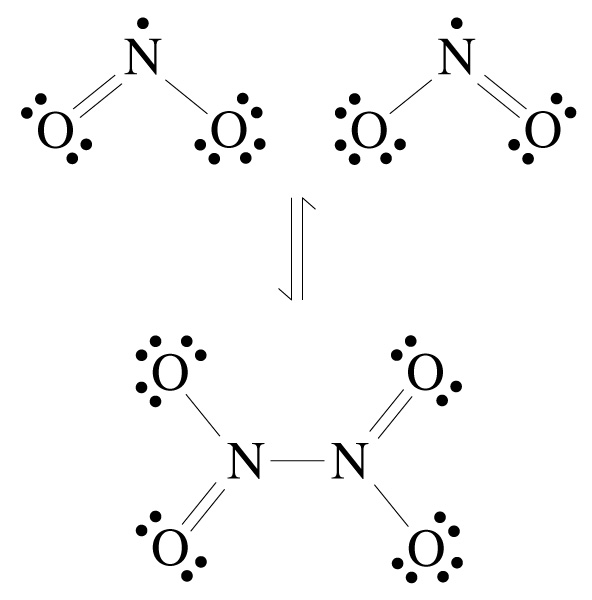 Bond energy is a positive value; the negative of this value implies that the dimerization reaction is exothermic - which is obviously true! We are going from a radical species - nitrogen dioxide - into a species with no unpaired electrons. Radicals are reactive!

We can also calculate this using heats of formation for both nitrogen tetraoxide and nitrogen dioxide and we'd get the same enthalpy of reaction.

Given the reaction $\ce{A -> B}$ you know that $\ce{A}$ and $\ce{B}$ must have the same atomic composition, i.e. they consist of the same number of atoms for each element, because if this wasn't the case there would be other reactants or products in the reaction equation (the reaction is some sort of rearrangement). So, $\ce{A}$ and $\ce{B}$ only differ in the way the atoms are linked together, i.e. some bonds that are present in $\ce{A}$ might not be present in $\ce{B}$ and vice versa.

Now, Hess' law, which states that the total enthalpy change during the complete course of a reaction is the same whether the reaction is made in one step or in several steps, leads you to the equation

where $\Delta H_F$ is the enthalpy of formation. This $\Delta H_F$ is simply the energy difference between the target compound and the (pure) elements it consists of, whereby each element is expected to be in its most stable modification for the given temperature.

So, yes, both methods are equivalent.

Not the answer you're looking for? Browse other questions tagged physical-chemistry thermodynamics enthalpy or ask your own question.

2
Why is ΔH (enthalpy)=Σreactants-Σproducts and not Σproducts-Σreactants?
0
Why are there two contradicting formulas for Enthalpy (Delta H):