After processing the data, I found the following graph: 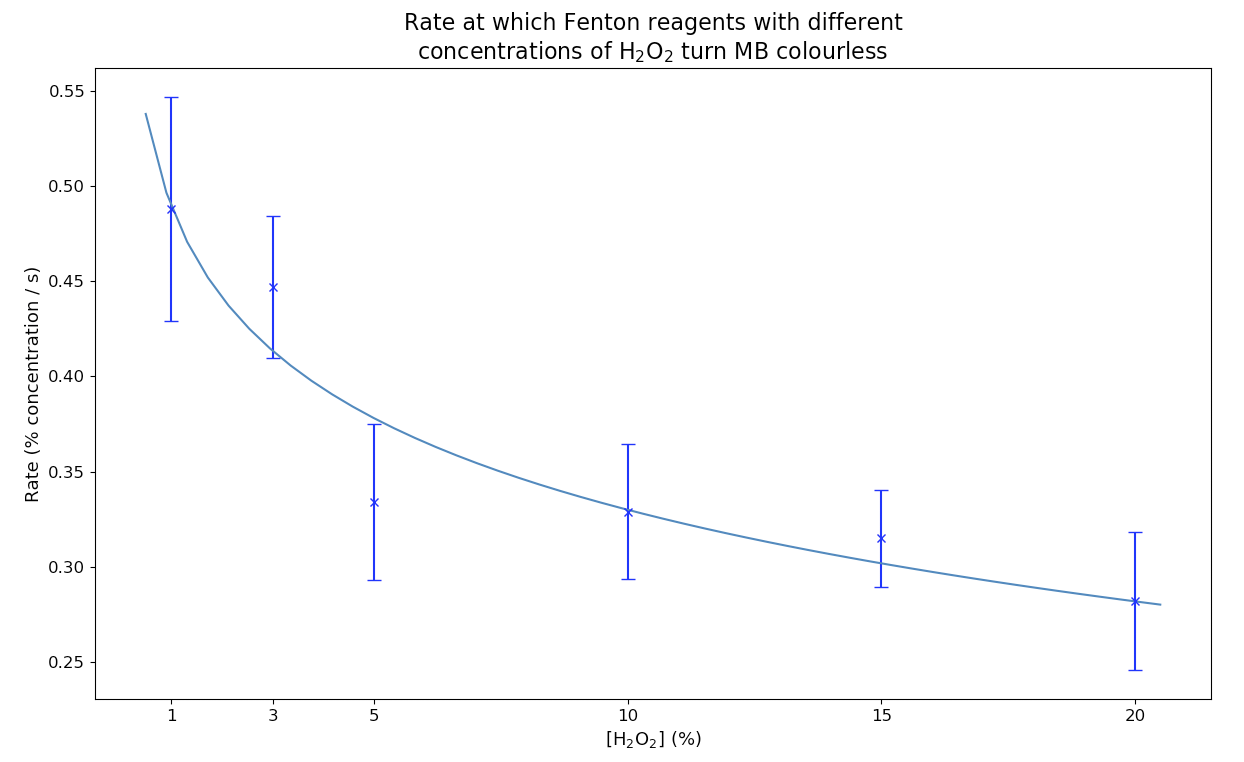 I was wondering why with higher concentrations of $\ce{H2O2}$ the rate decreases. I initially wanted to analyse this according to the Michaelis-Menten model (as $\ce{Fe^3+}$ ion can be regarded as a catalyst in this reaction). However, it seems my data goes in the opposite direction as the Michaelis-Menten plot. What surprised me most that it was decreasing.

I came up with a few hypotheses for this, and searched for papers, but I could not find any with results similar to mine. My main hypothesis was that because $\ce{Fe}$ ion and $\ce{H2O2}$ form $\ce{OH.}$ radicals and $\ce{OOH.}$ radicals (as reported here and here), and these radicals are what cause the decomposition of methylene blue, I thought that maybe if there was too high a concentration of $\ce{H2O2}$, there would be too many radicals, and this would in turn terminate the free radical reactions (when 2 free radicals meet). At lower concentrations, the radicals would continue propagating, hence decolourising methylene blue faster.

Moreover, I know that this is not a problem with the colorimeter, as I could see this decolourisation outside the colorimeter too. The following is a screenshot of a video I took; each reaction in the cuvette was started at the same time, and concentrations of $\ce{H2O2}$ used in order from left to right are 1, 3, 5, 10, 15, 20%.

I was wondering if anyone knew why this happened.

In this paper, a similar reduction in rate is observed at concentrations of H2O2 above 0.03 M final H2O2 concentration (which is about 0.1 wt %). They attribute it to $\ce{HO.}$ reacting with H2O2 (to yield $\ce{HOO.}$) more quickly than it reacts with MB. The result is that $\ce{HOO.}$ is much more abundant than $\ce{HO.}$ and its lower reactivity means a slower rate of reaction with MB.

Based on their data, I would recommend repeating the experiment with much lower H2O2 concentrations.

Not the answer you're looking for? Browse other questions tagged reaction-mechanism kinetics enzyme-kinetics or ask your own question.

1
How do I calculate the order of a reaction given slope?
2
Rate law of the iodine clock reaction
2
Enzyme-Kinetics. Michaelis-Menten Curve
1
Rate of Fenton Reaction
9
What is the actual mechanism of Fenton reaction?
4
Determine vmax and enzyme concentration (Michaelis–Menten)
2
Can't fit an exponential curve to the decomposition of hydrogen peroxide