Is there any scenario in which the size of a molecule increases due to an increase in temperature?

Take an ice cube for example. Heat is applied in a closed container until it is vaporized completely. Will the molecule's size be larger (on average)? Is there a substance that you know of that has odd behaviour such as changing molecular size due to temperature change? Obviously there would be more pressure in the case of $H_2O$. Have you heard of any substances that are exceptions to this rule? I would love to hear about it if you have.

If this question hasn't quite boggled your mind or you are having trouble thinking of an exception, let's say that an average diamond at about room temperature (something with entropy, ie: not a perfect lattice) and we say that this is a single macro-molecule because every carbon atom present in the diamond shares a bond with another carbon in the diamond.

Pretend we heat said diamond up a bit or let it sit for awhile. Are covalent bonds being broken and reformed as time goes on? If we heated it up enough without breaking the lattice completely, would the diamond itself, the molecule as a whole, increase in size at all? Or would the bonds just be broken more often and reformed, and the size change would be so negligible that it could hardly be considered an increase in volume?

First, let me remark to “the size of a molecule” is not particularly well-defined. I assume in the following that you are interested about bond lengths (which are averages over time of distances between bonded atoms), as seems to be the case in your example. In the simplest case, you can consider an isolated diatomic molecule (think: gas phase N2), and we suppose we're not going to temperature high enough to ionize it or otherwise break its bond. Because the interatomic potential is asymmetric: 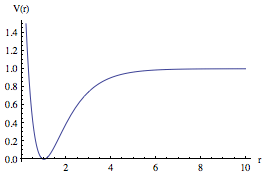 you can see that, as the temperature increases and the system is allowed to explore more of the potential energy curve (climb higher up the well), the average bond length will increase and not stay constant. So, for a single bond in an isolated molecule, it is expected that the bond lenghtens with temperature.

Now, one case where the overall “size expansion” can be clearly studied is that of crystalline materials. In solids, the evolution of volume as a function of temperature is named thermal expansion, and is characterized by the parameter of the same name, defined as: $$\large \alpha = \frac{1}{V} \frac{\partial V}{\partial T}$$ Because bonds grow longer with increasing temperature, most materials display a positive thermal expansion, i.e. they expand with temperature. This is, for example, the case for diamond, with $\alpha \approx +10^{-6} \text K^{-1}$.

However, some materials display the oppositive behavior, and shrink upon temperature increase. This phenomenon is called negative thermal expansion (NTE), and is rather uncommon.

This question has been answered from the point of view of vibration by @F'x; however, rotation of molecules is also quantized. The rotational energy levels are populated according to a Boltzmann distribution. The higher the temperature, the more-populated higher energy levels become.

Rotation of a diatomic molecule centrifugally stretches the bond length.

The article Centrifugal distortions in molecules: An ab initio approach quantifies the bond lengths of some simple molecules as a function of rotational energy level (J).

The most accurate calculations can be made for $\ce{H2+}$ because there is only one electron.

In the ground state bond length is 1.058 Angstroms.

Beyond J=43, the molecule is no longer stable because the centrifugal force is enough to pull the atoms apart.

Not the answer you're looking for? Browse other questions tagged physical-chemistry molecules temperature or ask your own question.