Q.15 the major product of the following reaction is: 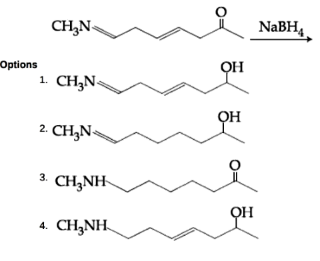 I have read that $\ce{NaBH4}$ reduces only aldehyde, ketone and acid chlorides. In some cases it may reduce double bonds conjugated with carbonyl groups. So shouldn't the answer here be option 1?

Waylander's comments answer the title question as well as I could. Sodium borohydride, and even modified versions where some of the hydride ligands are replaced by others like $\ce{NaBH3CN}$, can reduce imines.

The carbon-carbon bond here, not conjugated to either electronegatove function, is interactive to borohydride and thus products 2 and 3 are not reached.

21
Why does NaBH4 reduce double bonds conjugated to carbonyl groups, while LiAlH4 does not?
9
How can a ketone be enantioselectively reduced, in the presence of an ester?
33
Why can't Pd/C and H2 reduce both the alkene and carbonyl portions of Î±,Î˛-unsaturated carbonyls?
13
Why does LiAlH4 reduce an amide to an amine, but only reduce a ketone/aldehyde to an alcohol?
13
Why does LiAlH4 reduce the double bond of cinnamaldehyde, whereas NaBH4 does not?
2
Reduction of conjugated double bond by sodium borohydride
1
Can a Lindlar catalyst reduce aldehydes, nitriles, and carbonitriles?