Why does graphite have a high melting point even though its intermolecular forces are weak?

From what I've read online, when a substance undergoes a state change, the intermolecular forces are broken. The covalent bonds are not broken (http://www.bbc.co.uk/schools/gcsebitesize/science/add_ocr_pre_2011/chemicals/airmolecularrev2.shtml)

My textbook states that layers of graphite can slide over one another easily and can break of one another as they have weak intermolecular forces.

My textbook also states that the strong covalent bonds are broken during state changes, isn't this incorrect?

It's not usual to consider graphite as a material composed of "molecules" in the typical sense, though it could be viewed as a kind of polymer with two-dimensional macromolecules. Regardless, it is fruitful to analyse the individual sheets in graphite as the limit of increasingly large polycyclic aromatic hydrocarbons (PAHs). The sequence goes: benzene ($\ce{C6H6}$) → coronene ("superbenzene", $\ce{C24H12}$) → $\ce{C54H18}$ → ...

Crudely speaking, imagine that each individual aromatic ring contributes $\mathrm{10\ kJ\ mol^{-1}}$ worth of intermolecular attraction. Coronene contains 7 fused aromatic rings, which would lead to a total interaction of $\mathrm{70\ kJ\ mol^{-1}}$ between two molecules. As the molecules get larger, this value increases further and further. Eventually the total intermolecular interaction between two very large PAH molecules becomes enormous. For the substance to liquefy, it is only necessary to "break" a fraction of these intermolecular interactions (breaking all of them is turning the material into a gas), but even a small fraction eventually represents a huge amount of energy, so melting only happens at very high temperatures.

It is interesting to note how often chemists make the mistake of neglecting weak long-distance interactions (e.g. van der Waals), especially in the presence of stronger ones. For example, van der Waals interactions are fundamental to the stability of alkyl-substituted hexaphenylethane derivatives. In proteins, weak interactions are often overlooked in favour of hydrogen bonding ($\alpha$-helices and $\beta$-sheets), though they can be decisive in determining the correct conformation of an enzyme or how a protein interact with medicinal compounds.

As a last slight tangent, I just want to point out that in undergraduate-level chemistry, often one finds statements such as "boiling points for covalent compounds increase with their molecular weight. Now it should be evident this is not strictly true. It merely happens that compounds with higher molecular weights tend to be larger and allow a greater amount of intermolecular interactions per molecule, thus leading to higher boiling points.

Graphite has got a structure similar to books stacked on top of each other. Multiple layers on top of each other and each layer going by the name graphene. Atoms in each individual layer is covalently bonded, which is quite strong. Remember covalent bond is the one that holds diamond together, which is one of the hardest substances. Atoms in the individual layers of graphite are strongly held with only three of the four potential bonding sites satisfied. The fourth electron is free to migrate in the plane, making graphite electrically conductive. However, the different layers are held together by weak van der Waal forces, which enables them to slide on top of each other, making graphite a good lubricant. 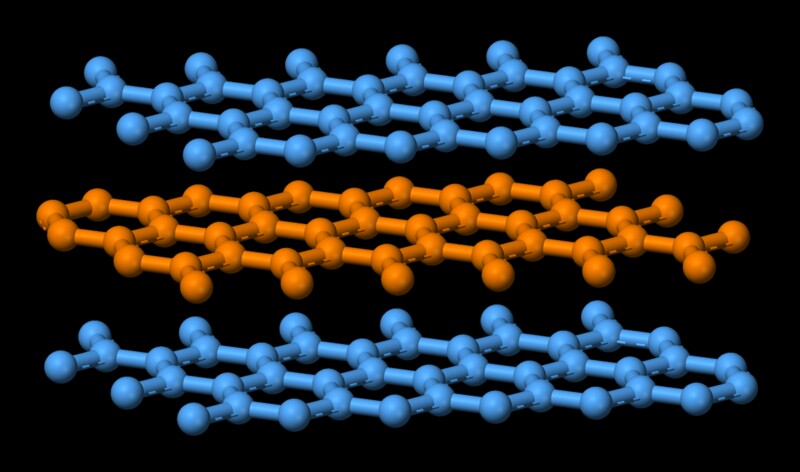 Now melting is essentially turning a highly ordered state of molecules to a disorderly one. That comes at an expense of energy. In this case, since the constituent molecules of graphite are held together by a strong covalent force, a high amount of energy is needed to weaken that bond. That explains graphite's high melting point.

0
Network covalent bonds during melting
0
How is it possible to melt diamonds?

13
Is an ionic bond more like a covalent bond or an intermolecular force?
3
Which bonds need to be broken to form a liquid?
3
When SiO2 changes state, what forces/bonds are being overcome/broken?
2
How does cross-linking between polymer chains increase the melting point of the polymer?
16
Why is the melting point of PCl3 less than that of PCl5?
4
For two compounds that are symmetrical, why does the more compact one have a higher melting point?
0
How are intermolecular forces between non-metallic substances affected when the substance is heated to its melting point?