This question touches on whether sulfur is hypervalent (whether it expands its octet when bonding).

The first picture shows both sulfurs with an expanded octet.

The problem is that in the top half of the below picture, we are supposed to end up with sulfuric acid, but we actually end up with sulfuric acid plus two lone pairs (if I drew the mechanism correctly). Did I? (I actually separated out the top part of the picture into two parts - first, hydrogen attacking oxygen; second, oxygen attacking sulfur - so the arrow pushing wouldn't get confusing).

The second picture follows updated chemical fact. According to Wikipedia, sulfur trioxide has one double bond and two dative single bonds. Sulfuric acid is also a charge separated species with four single bonds, not two single bonds and two double bonds. I seem to end up with the proper product here without any hand-waving. 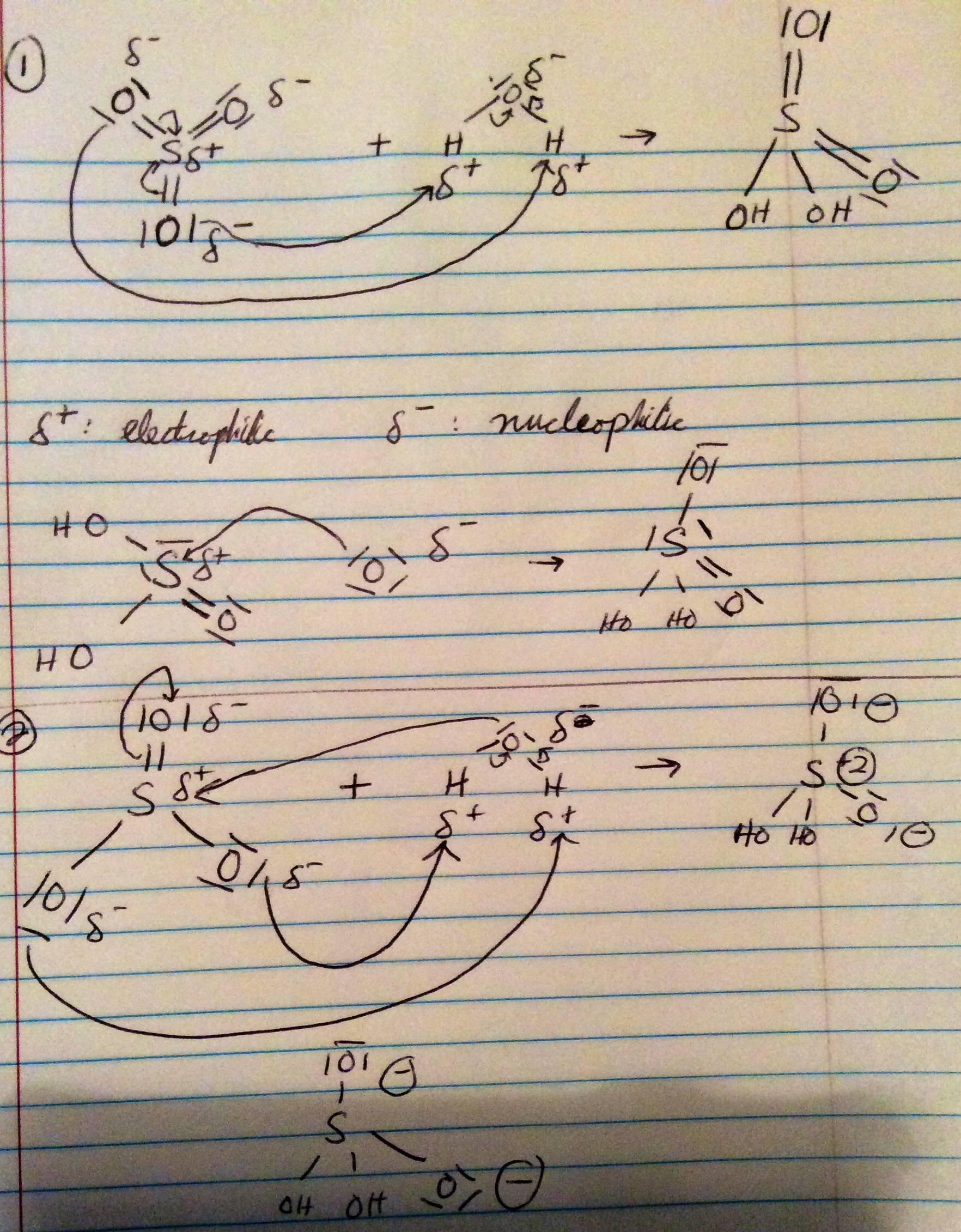 acid-base reaction-mechanism
Share
Improve this question
edited May 8 '17 at 4:40

I've drawn a more correct mechanism for the reaction of dilute $\ce{SO3}$ with water in the liquid phase: 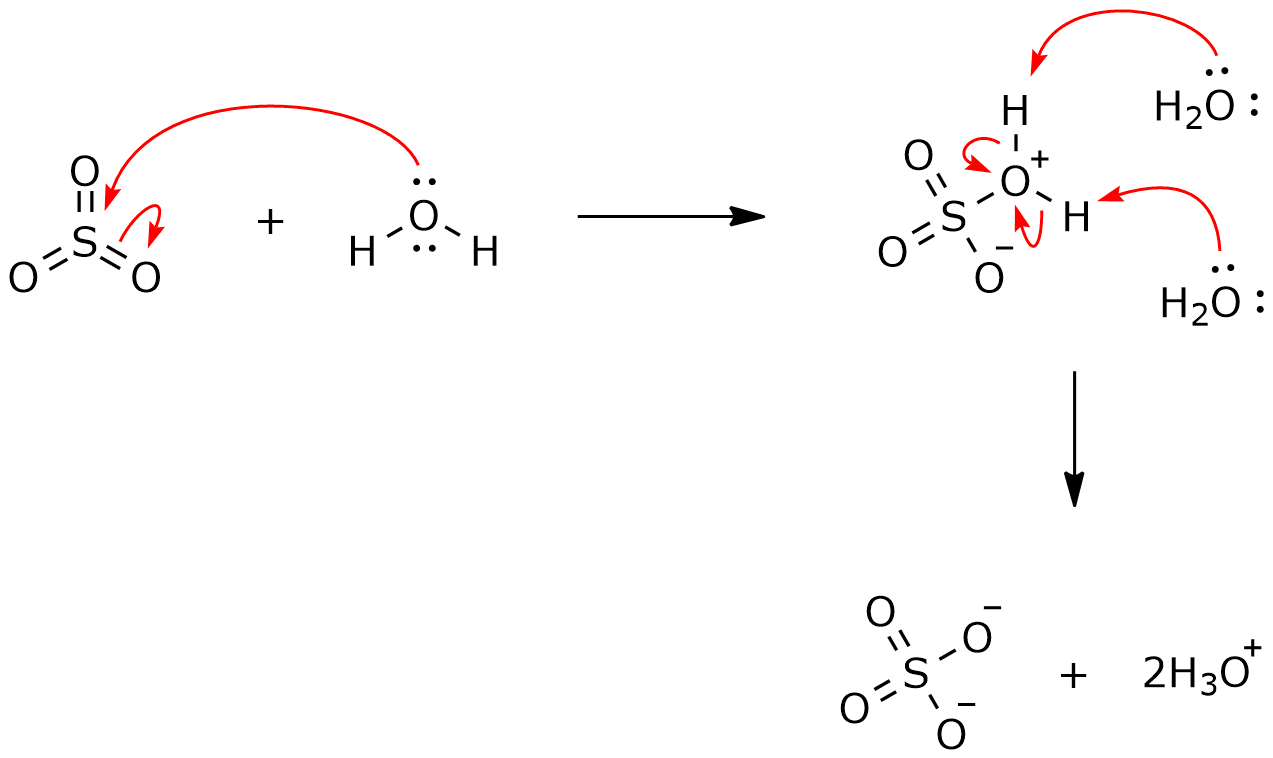 $\ce{SO3}$ is a strong electrophile, enough to react quickly with water, which is a relatively weak nucleophile. A water molecule is added to the structure, facilitated by the dislocation of a $\ce{S=O}$ bonding electron pair in $\ce{SO3}$ to the oxygen atom, forming the intermediate structure shown. Additional water molecules then quickly abstract hydrogen atoms from the intermediate (actually, the first abstraction is far easier than the second, so it might have been more proper to show each proton abstraction separately in sequence). The final product of the reaction is sulfate anions and hydronium cations ($\ce{H2SO4}$ is a strong acid in water, so it doesn't really exist as a molecule. The second proton isn't nearly as acidic as the first, but in dilute solution both are ionized). The formal global reaction is shown below the mechanism. Notice that at every point the formal charge on the central sulfur atom is exactly the same, zero.

Now, with regards to our little discussion about the actual structure of $\ce{SO3}$. Classical valence bond theory, enhanced with the concept of hypervalency and VSEPR theory, attributes the structure shown, with three double bonds. The Wikipedia article for $\ce{SO3}$ mentions another structure, based on modern valence bond theory computational calculations, with one double and two single bonds. This structure is quite interesting as it does not invoke hypervalency. Indeed, hypervalency is thought to be an old concept, and not really necessary in more modern theoretical treatments of chemical bonding.

However, if one opts to display the structure according to modern valence theory, they would do well to make it explicit. Almost all structural formulae today are drawn in the context of classical valence bond theory. Certain assumptions from the classical theory do not carry over to the modern theory. For example, the authors of the article "Modern valence bond theory", Chem. Soc. Rev., 1997,26, 87-100 (free access mirror) find that the bonding in $\ce{N2O}$, described classically as a mixture of the canonical forms $\ce{^{-}N= N^{+}=O}$ and $\ce{N≡N^{+}-O^{-}}$, is best described as $\ce{N≡N=O}$. Even with five bonds, the central nitrogen atom has a calculated occupancy close to 7, i.e. it is not hypervalent. Since the structural construction rules of classical and modern valence bond theory aren't the same, the structures generated from both do not mesh and cannot be compared directly. The simplest thing to do, then, is to draw $\ce{SO3}$ according to classical valence bond theory, with three double bonds.

Not the answer you're looking for? Browse other questions tagged acid-base reaction-mechanism or ask your own question.

6
What's the technical term for supercharging an acid with an oxidizer? And does it always work?
3
Is this the correct mechanism of the formation of the nitronium (NO2+) ion from sodium nitrate and sulfuric acid?
3
Preference of certain positions during chlorination of an alkene
1
Why isn't it commercially suitable to dissolve sulfur trioxide in water to produce sulfuric acid?
0
The reaction of iron with sulfur to produce Iron(II) sulfide is inconvenient (for me)
10
Why does a proton prefer to attack a double bond instead of protonating an alcohol in a reaction of unsaturated alcohol with sulphuric acid?
0
Effect of mixing acids on solubility
1
Reaction with sulfuric acid