Can the amount of shielding in proton NMR caused by ring currents be predicted?

My textbook (Organic Chemistry, 2nd Ed. Hornback, Joseph) states that if a hydrogen is located near the center of an aromatic ring it will experience an (often quite sizable) upfield shift, as seen in these images (borrowed from aforementioned textbook): 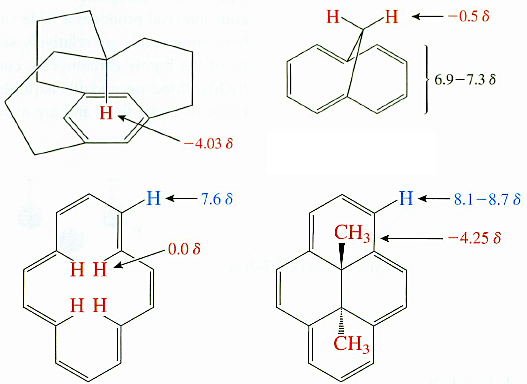 Theoretically it all makes sense - the ring current of the aromatic system shields these protons rather strongly. But is there a way to estimate what the actual upfield shift will be? For example, if provided with structure 1 and asked to estimate the chemical shift of the red hydrogen, how could you do so? Or do you just run the NMR and find out? My book doesn't give any advice on how to figure this out, just that it happens.

Johnson and Bovey first proposed a theory describing the ring current effect,[1] and in 1972 Haigh and Mallion published their often-cited paper on ring current shielding.[2] A later review by these authors in 1979 describes the mathematical prediction of ring currents very well.[3] You may often see this graphic describing ring current contributions to chemical shifts in textbooks. 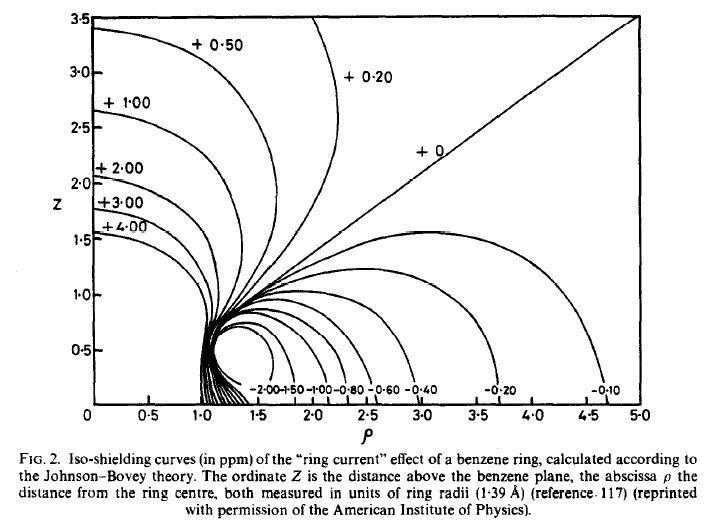 So, in answer to your question, it is possible in theory to make chemical shift predictions for nuclei within the shielded regions of ring currents, however in practice, it is very difficult and prone to large errors. Calculations require a very thorough knowledge of distances and angles between the aromatic plane and the nucleus of interest. And a reasonable computer.

Very few chemical shift prediction tables in texts or literature give examples of upfield-shifted aromatics, and none that I'm aware of give enough tabulated data to extend an even ballpark prediction. This makes it very, very difficult to make a prediction unless you have experience with the particular type of molecules you are dealing with. For example, I work with one research group who makes quite good estimations of chemical shifts for the inner ring proton within porphyrin systems, but this has evolved over many years of experience of dealing with this particular class of molecule. They would really be at a loss trying to predict any of the shifts for the 4 compounds you have shown.

Most desktop chemical shift predictors use an additive model based on combined chemical shift contributions, and do not do a full calculation of ring current properties. In fact, many desktop predictors give very poor estimations for these types of protons for this very reason, as they do not distinguish shielded and deshielded regions arising from ring current. For small organic molecules the variables dictating the ring current contribution are difficult to predict, especially for those signals experiencing increased shielding, such as overhanging methyl groups. They require knowledge of distance from the centre of the aromatic ring and angle from the plane. This information is often used qualitatively in spectral analysis to construct a 3-dimensional structure of a molecule, in explaining upfielded shifts of certain nuclei.

Magnetic anisotropy effects are very difficult to calculate. As such I don't believe there is a table that help you calculate the value so an experiment or a similar example is required. A look at Pretsch shows only one example of this system (structure 1 in your book). Running one of the structures in a NMR predictor gives results that are quite far from the experimental values and obviously don't take this effect into consideration