When looking over an old organic midterm I came across this question. 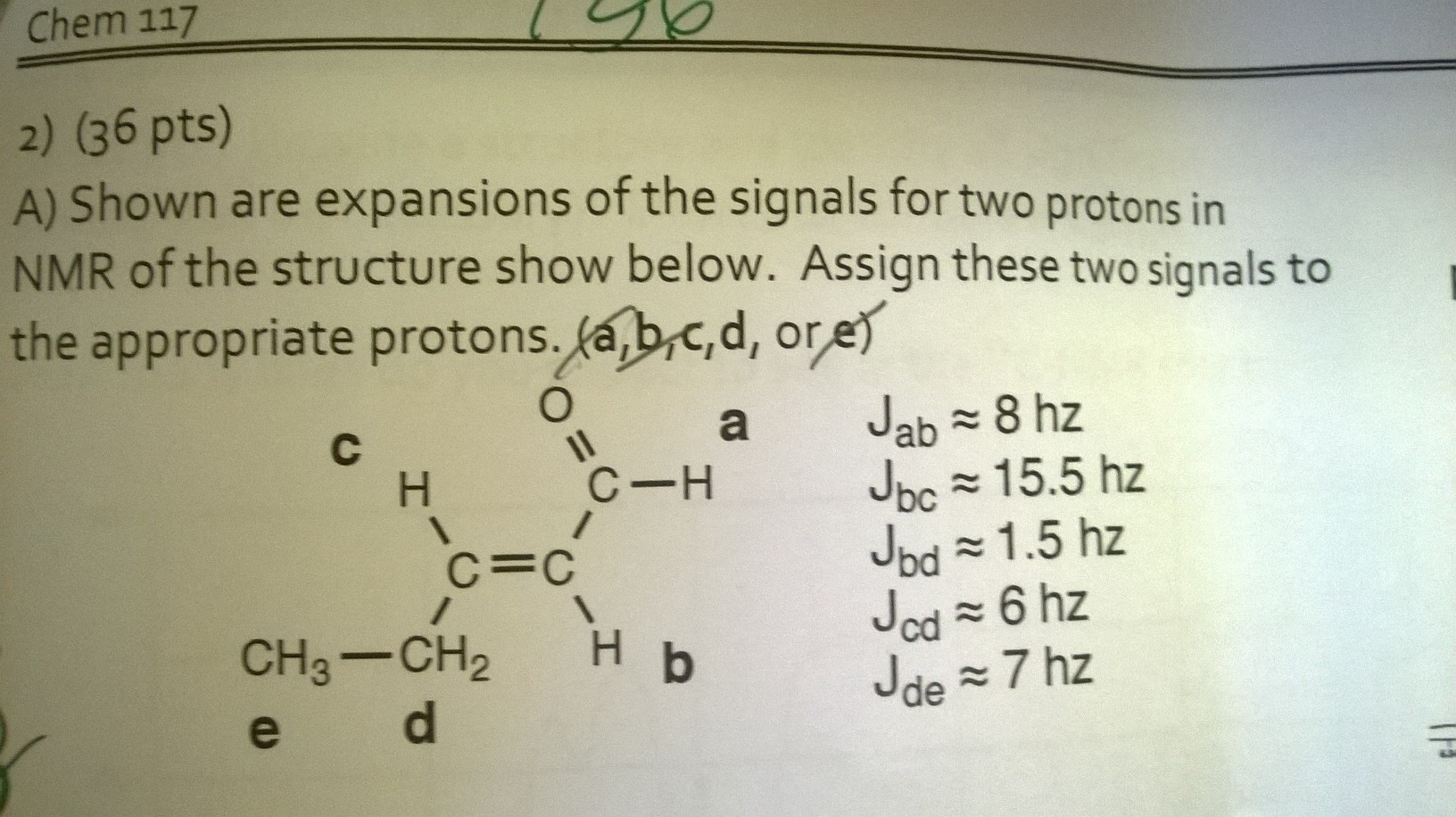 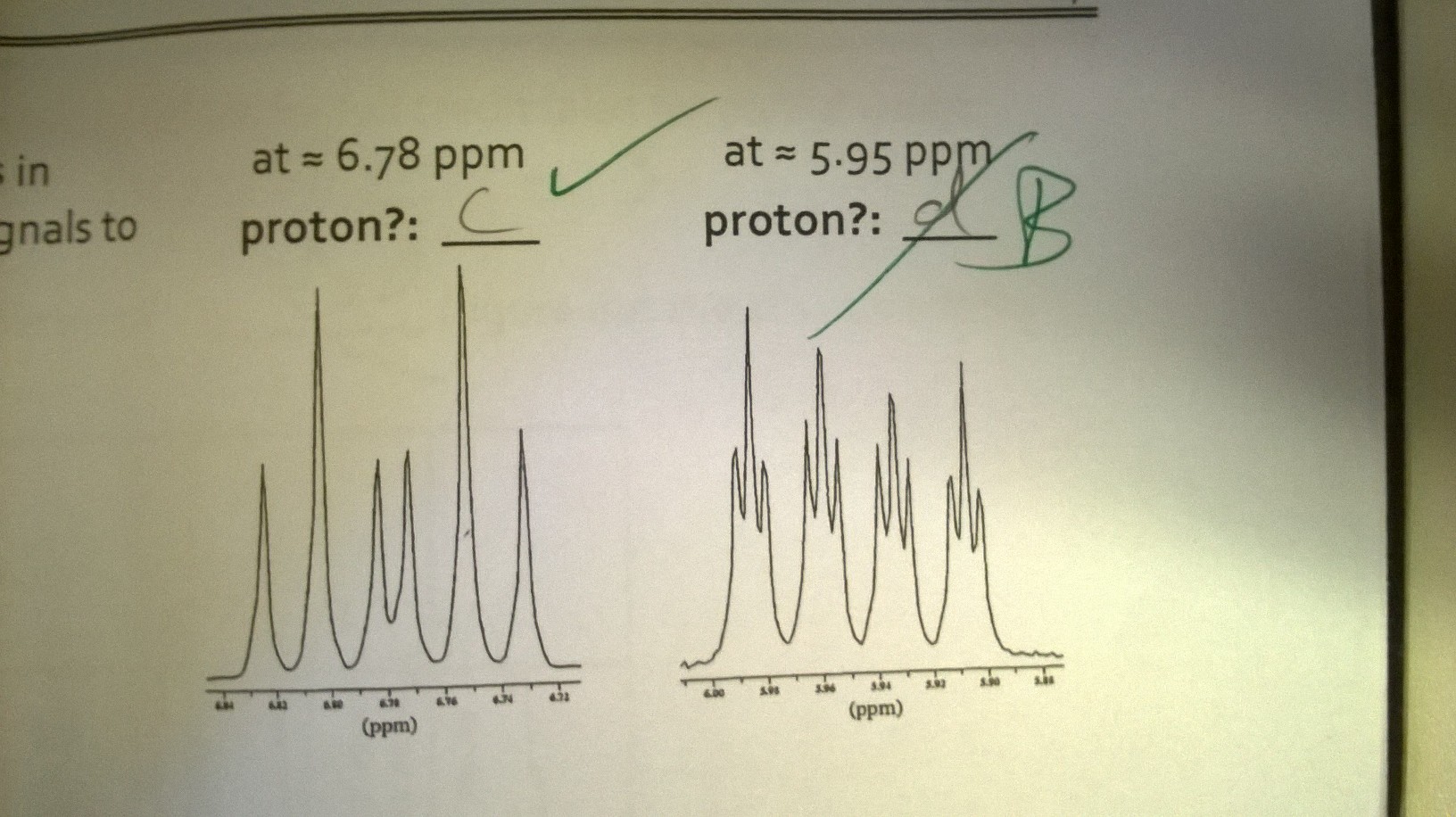 As you can see I got half of it right, but honestly I'm not sure how I got that one right or how you would answer this in general. Looking back at this now it appears that the first signal was split into a doublet and each peak was then split into a triplet, which makes sense for proton c (first split by b and then by d).

The second one seems trickier. It looks as though the signal was split into a quartet, and then each peak into a triplet. To me that looks like it should be d - split into the quartet by e and then split into the triplets by c and b. So why is the answer b? These J values wouldn't have been supplied for now reason - is there a way I could have used them? More generally, is it possible (and if so how) to identify the type of proton and the structure of a molecule if you just had access to the NMR and the J values like this?

organic-chemistry hydrogen nmr-spectroscopy
Share
Improve this question
asked May 14 '14 at 20:25

The proton(s) in question absorbs at 5.95 ppm, the olefinic region - so it cannot be D which is expected to absorb upfield in the aliphatic region. B is the correct answer. Proton B would be split by proton C into a doublet with a 15.5 Hz separation (the coupling constant $\ce{J_{BC}}$). Each line in the doublet would be further split into another doublet with a J=8 Hz spacing by proton A. So now we have 4 lines, a doublet of doublets. Each of these four lines will be further split into a triplet with 1.5 Hz spacing by the two (hence the triplet) D protons.

Using the chemical shift of a proton and the observed splitting (e.g. the coupling constants, or J values) can go a long way in helping to determine a structure, particularly in relatively simple molecules. As molecules get more complicated you can do advanced experiments to help with the structure determination. One example would be spin decoupling experiments. For example, if we "know" which signal is due to the D protons, we could irradiate them with energy during our nmr experiment. If they are coupled to proton B (they are), then the triplet in the B signal should diappear and we would just see our doublet of doublets. This type of experiment confirms which protons are coupled to which other protons. There are many other advanced nmr techniques that can be used to help in structure elucidation.

You can read the coupling constant directly from the NMR spectrum. Typically you would use processing software for this which makes it much easier, but you can do it from the spectra you have available as long as you know the field strength of the spectrometer. Your scale is in ppm in this case, to convert it to Hz you have to divide by the spectrometer frequency in MHz, e.g. 0.1 ppm on a 300 MHz spectrometer are 30 Hz.

I've marked where you would measure the coupling in your first example: 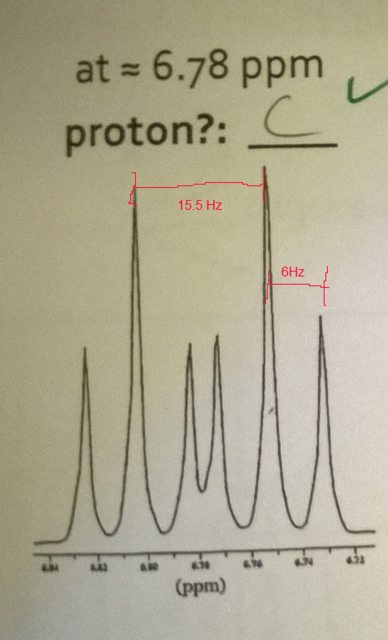 This is a nice example of the typical pattern you get for a proton on a double bond that couples once via the double bond and once via a single bond.

The second example is more complicated, the most important thing you should recognize is that it is not a real quartet. The four peaks are all roughly at equal height, if this was a true quartet they should follow Pascal's triangle and be at a ratio of 1:3:3:1.

This means there are more than two couplings involved, and if the couplings are identical or multiples of each other they can shift the peaks onto each other. In this case you have the big 15.5 Hz coupling, that signal is then split up again by the 6 Hz coupling which results in four roughly equally spaced signals that are again split up by a small 1.5 Hz coupling.

In this example the absolute chemical shift is a rather big help, both signals are around 6 ppm which pretty much tells you that those two are the two protons directly at the double bond.

Not the answer you're looking for? Browse other questions tagged organic-chemistry hydrogen nmr-spectroscopy or ask your own question.

2
Could I get a hint on the structure of this molecule based on HNMR spectra?
3
Spin spin coupling in a proton NMR of an ester?
7
1H-NMR spectrum for furfural
5
Carbon-13 NMR for chloroform
5
Proton NMR Spectrum for Nicotinic Acid
1
NMR of trigonal bipyramidal molecules
4
NMR splitting of protons in a ring
0
Coupling in C-NMR