Does anyone know the meaning of these two bonds in stereochemistry? These bonds are provided by the $\mathrm{\LaTeX}$ chemfig package. The creator of the chemfig package describes them as "hollow cram bonds".

Cram bonds are synonymous to the "wedged" bonds or, in this case, to "hollow wedged" bonds, which IUPAC [1, p. 1910] describes as follows (emphasis mine):

Central to the correct perception of a stereounit’s topography is the stylized generation of a vanishing point, realized by the graphic stereodescriptor, or stereobond, commonly called a “wedge” as illustrated in Figure 1 as 1a and 1b. Three such wedge symbols as in 3, 4, and 6 are in use, each of them capable of portraying the ligand Z in 1 and 2 as being located in the front (3 and 4) or behind (6) the picture plane. In an apparent search for further simplification, line symbols 5, 7, and 8 were invented as wedge substitutes. Lacking differentiation of their termini, line-type symbols appear, a priori, to be inherently incapable of serving such a purpose; nevertheless, they provide a useful function in the context of a convention. Accordingly, the stereogenic unit to which the line-type bond symbol is attached is considered to lie in the picture plane so that the symbol printed in bold (5) reveals its ligand Z in front of that plane, whereas the hashed symbols (7 and 8) are intended to show that the ligand is behind it. In other words, symbol 5 portrays the stereocenter at the vanishing point and hence functions such as 3 and 4. 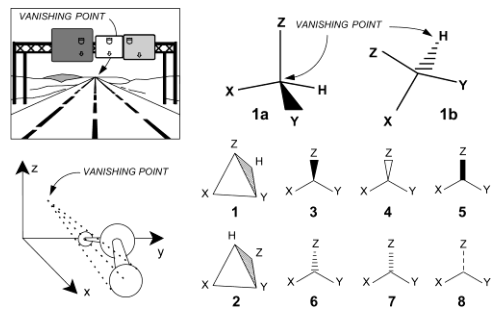 Not the answer you're looking for? Browse other questions tagged organic-chemistry stereochemistry notation or ask your own question.

6
What does the ZZE tag in an Chemical Table file refer to?
7
Why does this compound only have one pair of enantiomers?
10
Syntax and Typography of Atomic Orbitals
1
Comprehensive resource on diazo coupling?
2
What is the difference in dehydration of cis- and trans-1,2-cyclohexanedicarboxylic acid in anhydride formation?
2
Meaning of the symbol “$\Delta_\mathrm{sub}H^\circ[\ce{I2,s}]$”