Why is my sodium acetate not resulting in any crystals?

My son received a chemistry set for Christmas and we've been working through the experiments over the last few weeks.

One of them involves boiling white vinegar and adding baking soda to produce sodium acetate. After boiling this down it is supposed to result in some crystals forming on the pan. However, after trying it a couple times we haven't been successful in producing any crystals. What are we doing wrong?

At this point our booklet says that crystals should be forming around the outside of the pan. However, both times we have no crystals - only a liquid that looks like weak tea.

The solubility of sodium acetate is interesting (that means confusing!). Sodium acetate exists in two forms: anhydrous and trihydrate. When compounds exist in two forms like this, the solubilities, given in grams per 100 mL H20, are predictable: the hydrated form is much more soluble, because it is only partially the compound, and the other part is extra water, the solvent. 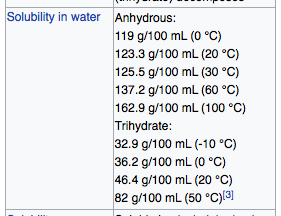 Sometimes different hydration stages of compounds have different temperature ranges of stability and solubility, but the behavior of sodium acetate is unique. The precipitate that forms so impressively upon cooling is probably the trihydrate, because the amount of sodium acetate in solution according to the recipe does not seem (in my quick estimate) to exceed the solubility of the anhydrous compound, and so the solution produced might be metastable. For some length of time. But, we may be able to initiate crystallization by scratching the glass container, or stirring it, or allowing a drop to dry completely to produce some solid, then using that as a seed for the rest of the solution. Or freezing it.

What I have done is to heat some (pure) sodium acetate to form a concentrated solution (calculated to be supersaturated at room temp), then cooled it: no ppt. Then I touched the surface of the solution with my fingertip and BOOM! Crystallization proceeded like a shot, producing a mass of crystals that filled the container and solidified the former liquid mass. (Did I say it was supersaturated?) I was surprised at the mass of crystals compared to the amount of material I had added to the water at the beginning, but did not think about it till now.

It turns out that the solubility curves of trihydrate and anhydrous sodium acetate are quite separated: 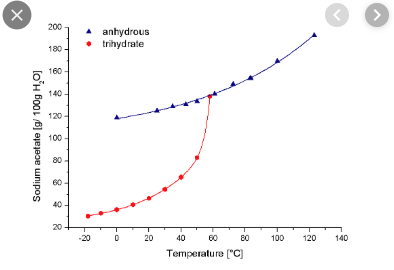 The formation of trihydrate at low temperatures must be a difficult process, and the brown goo obtained here might signify some crystallization inhibitor is present. Maybe a slight excess of NaHCO3 or HCH3CO2 is holding things up - you could try adding a drop of the vinegar, or a few grains of NaHCO3 to see if that changed anything. But If you have a glass rod, scratch the side of the glass container - that works almost all the time.

What you are trying to prepare is a "super-saturated" solution. How fast and how much of a substance will dissolve in a solvent often depends on temperature. For example, you can make a lot more sugar dissolve in a glass of hot water than a glass of cold water. A solution is super-saturated when you dissolve the maximum amount of solute at a high temperature then let the solution cool. That solution now has more solvent dissolved in it that it is supposed to at the cooler temperature. Often, this sets things up for crystals to form (the solution expels the overabundance of solvent via crystal-formation). Anyway, I'd try taking what you already have, heating it back up again. Add more of the baking soda if you still have some. If not, don't worry about it. Let the solution simmer longer than the directions call for, then let it cool down slowly. Sometimes crystals take a couple of days to form.

3
Decomposition products of sodium acetate
3
Why did my iron nails not dissolve in hydrochloric acid?
2
Is home synthesis of cellulose acetate possible, and why?
1
Recrystallizing Sodium Acetate from solution
4
Why does my sodium acetate look like metalic magma?
0
Sodium acetate stoichiometry from baking soda and vinegar