A mixture of 4 compounds is extracted with HCl. Which one would go to the aqueous layer? [closed] 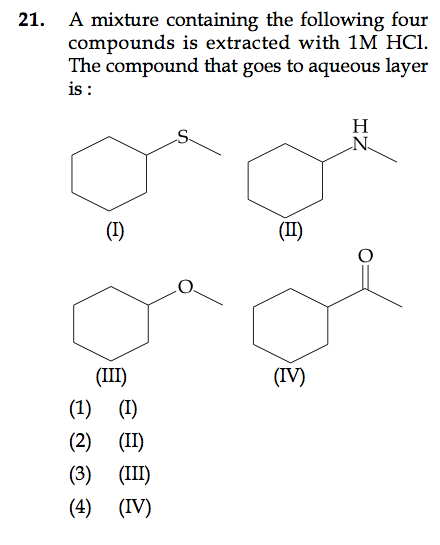 So this has to do something with the H+ ion bonding with the compound. I dont know how to approach it. The answer given is 2

This is a classic example of an acid-base extraction. If a mixture of organic compounds in some organic solvent is treated with an aqueous acid, any bases in the original mixture react to form their conjugate acids. These conjugate acids tend to have ionic functional groups that increase their solubility in water.

The key skills required to solve this problem are 1) identifying the principal functional group in each structure and 2) recognizing the characteristic acid-base properties of each function group.

These compounds are (in order), a sulfide, an amine, an ether, and a ketone. While you could envision perhaps three of them being polar and suitable hydrogen bond acceptors (sulfuer is approximately as electronegative as carbon, and sulfur does not participate in hydrogen bonds), only one is a base - the amine. The characteristic acid-base behavior of functional groups could be constructed each time you need it, but may best be memorized. There are only a few common functional groups that typically behave as acids or bases in aqueous solutions.

5
Effects Guiding Electrophilic Aromatic Substitution
0
How does a carbocation have a positive charge?
2
What is the enol form of 4-methylcyclohex-2-en-1-one?
0
How to differentiate the notation of a compounds charge and an anions oxidations state?
0
HCl/H2O with alkene: Which one reacts?
0
Which one is the stronger base?