Does aniline react with diazonium ions at C or N?

In the azo coupling of aniline with benzenediazonium cation, I thought of two possible products 1 and 2 that could be formed. However, I can't work out which will be preferred. What would be the major product and why?

As noted by Mayr et al. (the discussion below is taken from the same article):[1]

Similar regioselectivities are found in azo coupling reactions. It has long been known that anilines, as well as N-alkyl anilines, initially form triazenes in coupling reactions with benzenediazonium salts (N coupling), whereas C coupling takes place with tertiary aromatic amines. [...] It was reported that the reversible attack at the nitrogen atom is generally 20–25 times faster than the attack at the carbon atom. The mechanism (in the scheme below) shows that even diazonium ions prefer N attack of kinetic control. In the absence of base, the formation of the triazene is reversible and one observes the azo compound as the only reaction product. 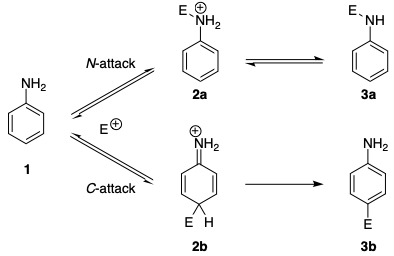 Secondly, there is a greater intrinsic barrier to a reaction at carbon, due to the large reorganisation energy involved in C-attack. To a first approximation, this can be understood in terms of atomic positions and electron density distribution: in both of these aspects 2a is closer to 1 than 2b is.

Both of these factors combined make the formation of 2a much faster than the formation of 2b (for more information, see: Marcus theory on Wikipedia). Hence, under kinetic control, the triazene 3a (E = PhN2) is formed from deprotonation of 2a.

If 2a cannot be deprotonated – this is the case if there is no base, or if the substrate is an N,N-dialkylaniline – the triazene 3a cannot be formed, and so the azobenzene 3b is the only product. Otherwise, it is necessary to use thermodynamic conditions to obtain the azobenzene 3b, which is more stable than 3a. This is consistent with the experimental procedures that Waylander has linked in his answer, where sodium acetate is used for the formation of the triazene 3a, and the HCl salt of aniline (without any added base) is used for the formation of azobenzene 3b.

Not the answer you're looking for? Browse other questions tagged organic-chemistry aromatic-compounds amines regioselectivity or ask your own question.

27
What is the role of pH in azo coupling reaction of diazonium with phenol and aniline?
7
Making o-bromoaniline from aniline
2
Predicting major product of a reaction with nitrous acid
4
Can aniline autodeprotonate?
4
Selectivity of diazo-coupling with p-amino phenol