Hyperconjugation and the stability of alkenes

Clearly, this issue has been touched on here and here. However, I would like to raise a new point on the issue.

I have always thought that stabilisation of the $\ce {C=C}$ $\pi$ bond via hyperconjugation is through an interaction between a $\ce {C-C}$ or $\ce {C-H}$ $\sigma$ MO and the $\pi^*$ MO. This is also the explanation presented by orthocresol and Philipp in the posts linked above. However, the explanation given by Fleming (2009) is somewhat different as can be seen from the diagram below, taken from p. 74 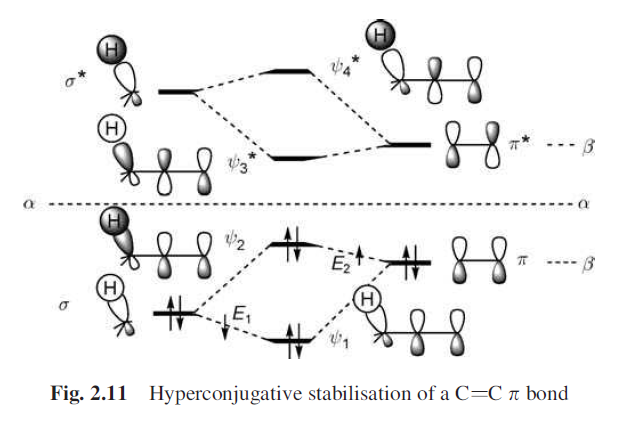 One factor is the hyperconjugative stabilisation of the $\ce {C=C}$ $\pi$ bond by the alkyl groups. Fig. 2.11 shows the interaction of the orbitals of a $\sigma$ bond with the orbitals of a $\pi$ bond, which is similar to the interaction of two $\pi$ bonds in butadiene (Fig. 1.32). Although the $\sigma$-bonding orbital and the $\pi^*$-antibonding orbital are further apart than $\psi_2$ and $\psi_3^*$ in butadiene, they are just close enough to mix in a bonding sense effectively to lower the energies of $\psi_1$ and $\psi_2$ in Fig. 2.11, making the drop in energy $\ce {E1}$ a little greater than the rise inenergy $\ce {E2}$.

Ordinarily without the contribution of the π* orbital, we would expect the interaction of two filled orbitals to be destabilising, in the sense that $E_2 > E_1$ (as drawn in the diagram). This is the same rationale as why simple MO theory predicts the helium dimer to be unstable with respect to dissociation, for example.

It might be slightly unclear, but my interpretation of the text is that the empty π* orbital contributes a little bit to both MOs $\psi_1$ and $\psi_2$. This leads to a tiny stabilisation of both of these two MOs, such that the destabilisation $E_2$ is a bit smaller and the stabilisation $E_1$ a bit larger. Although it is not very obvious, you can see this from the figure.

It could probably have been made clearer by drawing extra dotted lines from the π* orbital to those MOs. My guess as to why Fleming hasn't done that is because he wanted to use dotted lines to illustrate the most significant orbital interactions (those between orbitals of similar energy). Note how he emphasises in the text that the σ and π* orbitals are not very close in energy (which implies that the interaction is small).

Not the answer you're looking for? Browse other questions tagged organic-chemistry molecular-orbital-theory hyperconjugation or ask your own question.