When I was reading about Diels-Alder reactions, I was confused about the cis and trans rules for dienophiles, as shown below. 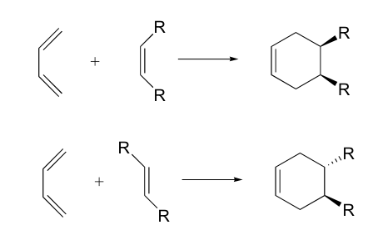 Why is this the case?

To answer you question, imagine (or: build a molecular model) that the newly formed six-membered ring may be simplified as a flat disk. Then

On paper, the observed conservation of sterochemical information is both the synchronicity of the events (pushing the pairs of electrons, absence of [charged] intermediates as e.g. in nucleophilic substitutions), as well as the principle of conserving the symmetry of molecular orbitals envolved here.

You are right, this process and many others that involve 3 pairs of electrons are concertated reacctions, and this happens as before having the final bonds filled, there exist a combination of sigmas and pi wave functions so that the other bonds that have been previous have no time to take other positions. After profesor Eliel, and also my own experience doing this in 500 l reactor using methylpentadiene as diene and acrolein or crotonic aldehyde and having huge GLC showing the different products.

Not the answer you're looking for? Browse other questions tagged organic-chemistry synthesis pericyclic or ask your own question.

13
Do eta-4 benzene ligands participate in Diels Alder or other cycloadditions?
5
Relative rates of two acyclic dienes in the Diels-Alder reaction
3
Can vinyl alcohol react as a dienophile in Diels-Alder reactions?
2
Is there a characterisation for conjugated dienes similar to cis-trans?