Explanation for bond lengths in trans-hexatriene

Hexatriene is an unsaturated hydrocarbon with six carbon atoms and five carbon-carbon bonds, three of which are double bonds.

Clayden's organic chemistry hints that the explanation has to do with the molecular orbits formed and the conjugation system in the molecule. However, I do not fully understand this explanation.

Why do these carbon-carbon bonds show this unusual bond length behavior? A thourough explanation using MO theory would be appreciated.

If you derive the π-type molecular orbitals of hexatriene, the three lower-energy MOs which are filled would look something like this (image from p 33 of Fleming's Molecular Orbitals and Organic Chemical Reactions, Reference Edition): 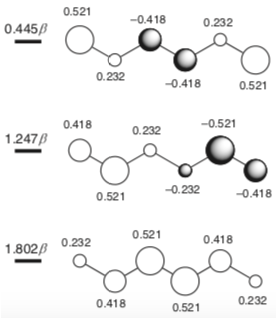 I suspect what Clayden is getting at is that in the second MO, there is some antibonding character between C3 and C4, whereas the C1/C2 and C5/C6 interaction is purely bonding.

Not the answer you're looking for? Browse other questions tagged organic-chemistry bond molecular-orbital-theory or ask your own question.

8
How would you measure the rate of this SN1 reaction?
5
Why are 3 equivalents of organolithium needed in synthesis of ketone from carboxylic acid?
6
Is it possible for the iodine atom in periodate ester to be octavalent?
9
Bond lengths in naphthalene
3
Conditions for imine formation
4
Molecular orbital explanation of why the protonation of the oxygen atom makes a carbonyl group more electrophilic
14
Explanation of the strength of phosphorus–oxygen bond