However, the energy profile diagram shown in b is less straightforward. The reaction that it describes has the first ionisation step as $\ce{RX^+ -> R^+ + X}$. In the caption, it is written:

Polar solvents decrease the rate because stabilisation of the [transition state] is less than for the more polar reactant.

Firstly, I would like to ask if "decrease the rate" here means that this type of $\mathrm{S_N1}$ reactions occur more slowly in polar solvents compared to in nonpolar solvents. If we look at the activation energy $E_\mathrm a$ and assuming they are relatively drawn to scale, then we can conclude that for such reaction type, the rate would be faster in nonpolar solvents since it has a comparatively smaller $E_\mathrm a$.

Actually, we do notice that the TS is still lower in energy for the polar solvent, which is logical since although it may be less charged overall, the TS is nevertheless charged and would obviously be stabilised by a polar solvent. 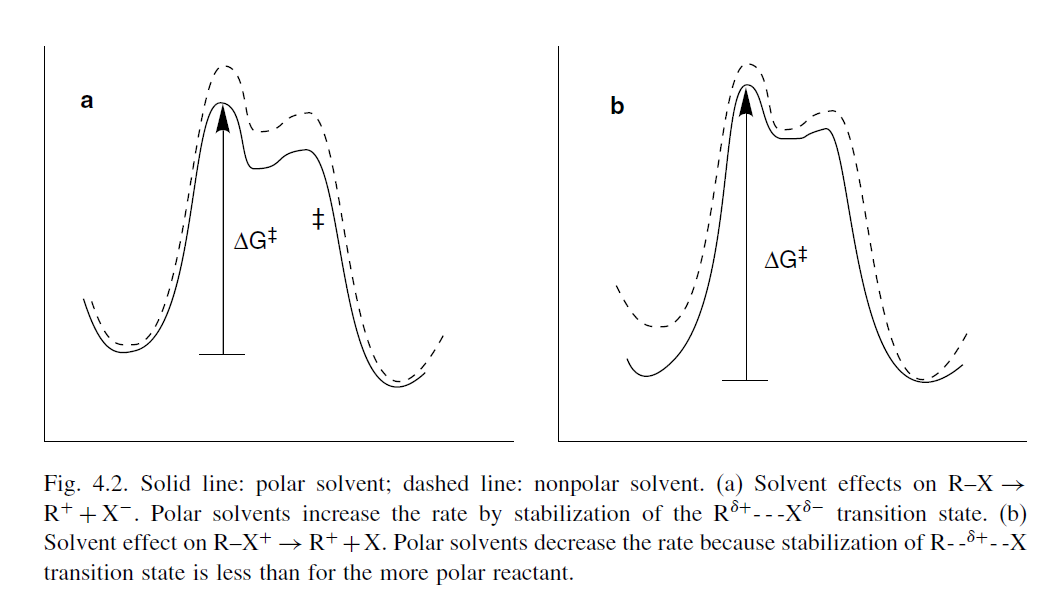 Browse other questions tagged organic-chemistry carbocation nucleophilic-substitution or ask your own question.

15
Alkane deprotonation by organolithiums
9
If SOCl2 reacts with alcohols via SNi, why doesn't POCl3?
6
Dependence of rates of neighbouring group participation on length of alkyl chain