Can't decide between E1 and E2 mechanisms for this reaction

I can see that due to the substrate being bulky, an elimination reaction will take place and not substitution. The reagent is a strong base. E1 reactions are independent of the base chosen, and E2 requires strong base. There is no information about the geometry of the substrate (i.e., whether the beta hydrogens are anti to the halide). How do I decide between the two mechanisms? 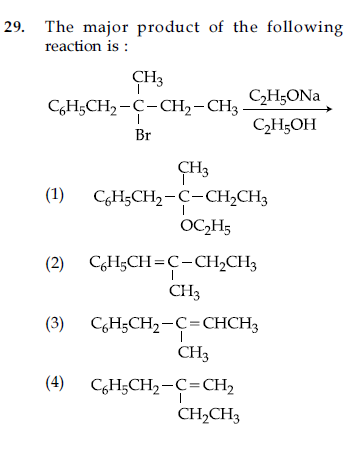 You have a tertiary halide. These dissociate rather easily into the relatively stable tertiary carbocation and the free anion. That in and by itself should be indication enough that the reaction proceeds via E1. Alcoholates are only moderately strong bases so the mechanism cannot be $\mathrm{E1_{cb}}$.

You could consider E2 because the substrate is non-cyclic which means that it can always orient itself in such a way that a hydrogen atom is anti with respect to the halide. The only thing to take care of is steric hindrance; just draw the appropriate Newman projections to determine the likelyhood.

Once you have the tertiary carbocation, any of the β hydrogens could dissociate. You would likely initially get some kind of mixture based on the corresponding $\mathrm pK_\mathrm a$ values weighted by the number of hydrogens. Looking at the three different carbons, one is obviously much more acidic because it is benzylic. This explains the major product.

Even if initially another hydrogen is deprotonated, you can assume that equilibration takes place towards the conjugated styrene system given catalytic excess base.

5
Elimination from Vinylic Halides
2
E1 elimination and alkyne formation
4
Why can't HS- participate in E1 reactions?
2
The product of a reaction series involving 1,3-dithiane, 1-chloro-3-iodopropane and butyllithium
4
What's the most appropriate name for this reaction?
1
How to determine if a reaction proceeds via SN1, SN2, E1 or E2 mechanism?
2
When will acid-base reactions occur before substitution reaction
2
How to determine if a base is bulky?