PREFACE: I am no expert on this topic. My questions at the bottom may be off base. I have some experience with symmetry-adapted perturbation theory (SAPT) when it comes to analyzing intermolecular interactions. The total interaction energy of a system can be quantified in four different energy components including exchange, induction, electrostatics, and dispersion.

Natural Bond Orbital (NBO) analyses translate the complex quantum-mechanical wavefunction into a more tangible Lewis-dot-like formalism (natural Lewis structure). The introduction of the following series of equations has been largely influenced by the presentation of Weinhold and Landis (2012).

The natural Lewis structure wavefunction is simply a fictitious representation of an exact physical system where resonance effects are non-existent.

Now imagine a corresponding Hamiltonian, $\hat{\mathcal{H}}$, which can also be treated as an additive scheme with corresponding components to each piece of the wavefunction:

Given these two equations and the form of the Schrödinger Equation, $\hat{\mathcal{H}}\Psi=E\Psi$, there must also exist a similar construction of the energy of the system, $E$, such that

These three equations provide the foundation for a "systematic 'perturbation theory' analysis", where $\hat{\mathcal{H}}^{(L)}$ is the unperturbed Hamiltonian with a corresponding (known) eigenfunction, $\Psi^{(L)}$, and energy eigenvalue $E^{(L)}$. Note that $\Psi^{(L)}$ is not only known, but it is related to an 'idealized single reference picture' in which each Lewis-type NBO has exact double occupancy for closed shell systems.

As with Hartree-Fock, the limit of a single-reference method can be reached by an infinite expansion of a basis ($\Omega)$ in the one-electron eigenvalue equation. For the natural Lewis structure, this can be written as

where $\varepsilon_i^{(L)}$ are orbital energies of Lewis-type NBOs. Because $h^{(0)}$ also contains the non-Lewis contributions such that

Because natural Lewis structures contain zero resonance, the donor (Lewis-type NBOs) and acceptor (non-Lewis-type NBOs) orbitals do not interact due to their orthogonal nature

However, a real-world $1e^-$ Hamiltonian operator, $F$ (i.e. Fock operator, Kohn-Sham operator, etc.), will have donor-acceptor interactions such that

leading to mixing (delocalization) which connects the non-Lewis type NBOs with Lewis-type NBOs.

This mixing of the donor and acceptor orbitals can be treated with second-order perturbation theory. Even though $\Psi^{(L)}$ ignores interactions with non-Lewis acceptors, it contains more than 99% of the total electron density, $\rho_L$, offering a good starting point for an unperturbed wavefunction.

The mixing of donors and acceptors lead to an overall energy lowering ("stabilization"), a quantum mechanical phenomenon. Consider two interacting orbitals, as schematized below. One is doubly-occupied with a lone electron pair, $n$, and the other is an unoccupied antibonding orbital (here a $\pi^{\ast}$ orbital). 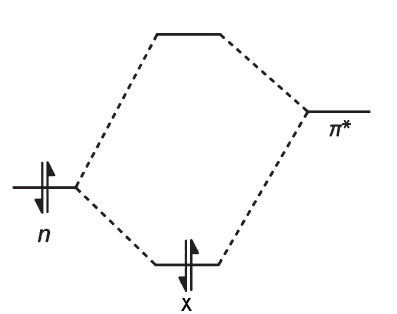 The overlap of the lone electron pair, $n$, with the vacant antibonding orbital, $\pi^{\ast}$ causes an change in energy of the lower occupied orbital, $x$. This change in energy between the non-mixing orbital with $n$ and the mixing orbital $x$ (denoted as $\Delta E$) is referred to as 'stabilization energy' of the electron delocalization. This energy (in kcal mol$^{-1}$) is determined via the following equation:

So we have introduced (albeit very poorly) the concept of a separable wavefunction into natural Lewis and non-Lewis type formalisms. These two states mix, allowing for delocalization of electrons, a phenomenon which leads to lower energy states. This energy lowering is commonly called 'stabilization energy'.

Unfortunately, after such an introduction, I am still at a loss as to what all of this really means. As a theoretical chemist (I'm a chemist, theoretically speaking...), I am interested in the physical significance of this type of quantity [$E(2)$]. However, I am unsure how significant this type of value truly is. Do these delocalizations (energy stabilizations) lead to an overall lower energy of the system? Would a system with more of these delocalizations be expected to lie lower in energy than a comparable system without delocalizations? Can that type of correlation be made?

I guess I just do not see any usefulness in computing these $E(2)$ values for any reason because, while it may tell you that particular donor-acceptor interactions lead to this energy lowering, it doesn't offer much more than that. What am I missing here?

TL;DR: Lewis $\to$ Non-Lewis $\mathbf{E(2)}$ values have no direct physical significance, are intrinsically un-measurable, and serve only to quantify the extent to which the "real" wavefunction for a system deviates from the fictional idealized Lewis-structure wavefunction.

$E(2)$ values do, however, correlate with a variety of trends in chemical bonding and reactivity, and thus can be helpful in interpreting experimental or computational data or in highlighting potentially interesting lines of inquiry.

LordStryker: This approximation is largely unphysical if I recall correctly.

You do recall correctly. I'm reading Weinhold's Valency and Bonding (1st ed.) currently, and the first chapter is peppered with definitions of artificial Hamiltonians and Fock operators. For example, the first example he gives is of a Hamiltonian operator for independent (not field-averaged!) electrons:

I don't think he actually ever uses these definitions in the course of developing the NBO methodology, but it's instructive that this is the first example he chose in defining the perturbation approach that underlies it. To the best of my ability to determine:

The core of NBO analysis is founded upon selecting non-physical, but chemically intuitive, reference states, and quantifying the extent of the departure from these fictional references that is required in order to reach the "real" wavefunction of interest.

In other words, Martin is exactly right:

This value gives you a hint on how "accurate" your Lewis structure is. The smaller it is, the better it will be described by Lewis.

Responding to a couple of the specific questions at the end of the post:

Q: Do these delocalizations (energy stabilizations) lead to an overall lower energy of the system?

Absolutely, when compared to the fictitious idealized-Lewis reference. In his 2012 book, Discovering Chemistry with Natural Bond Orbitals (the one cited at the top of the original post), Weinhold illustrates quite explicitly how coercing the wavefunction not to exploit these delocalizations leads to appreciably more-positive energies. Again, though, the calculations carried out with these delocalizations prohibited are entirely unphysical, so it's not as though a system "knows it should delocalize as much as it can to get more stable"—any real system will already intrinsically exhibit all available delocalization that provides increased energetic stability.

Yes. This is how NBO explains the spatial patterns of, e.g., hyperconjugation. In the Wikipedia article on the topic, for example, the role of hyperconjugation in establishing the energetic favorability of the staggered conformation of ethane is discussed. Per the below figure (public domain), the staggered conformation allows electrons in a given $\ce{C-H}$ $\sigma$-bonding orbital to delocalize into the $\sigma^*$-antibonding orbital of a parallel $\ce{C-H}$ bond on the vicinal carbon:

From Valency and Bonding, p228, this favorable hyperconjugative delocalization is reflected in $E(2)$ values of greater magnitude:

Second-order perturbative estimates [$E(2)$ values] indicate that each trans-like donor-acceptor [vicinal $\sigma \to \sigma^*$] interaction stabilizes the [staggered-conformation] molecule by $\pu{2.58kcal mol^-1}$, compared with only $\pu{0.89kcal mol^-1}$ for the cis-like interactions [in the eclipsed geometry]. The smaller gauche-like stabilizations ($\pu{0.20kcal mol^-1}$ at $60^\circ$ in the staggered conformer, $\pu{0.70kcal mol^-1}$ at $120^\circ$ in the eclipsed conformer) diminish the difference somewhat, but still preserve a significant hyperconjugative advantage for the staggered conformer.

So, while it's experimentally impossible to quantitatively "measure the energy" of an ethane molecule in which hyperconjugative delocalization is forbidden to occur, the $E(2)$ values provide support for the qualitative argument of hyperconjugation as a significant element of the preference of ethane for the staggered conformation. The relative (in)stability of various chemical features found across a wide range of systems can be examined by calculating judiciously selected $E(2)$ values.

Q: So say a model dimer system has an $E(2)$ of $\pu{-10kcal mol^-1}$ for a particular intermolecular interaction and has an overall electronic binding energy of $\pu{-20kcal mol^-1}$. Does that mean that half of the binding energy is due to this $E(2)$ value? Can that type of correlation even be made? (from this comment)

I agree with tschoppi: Based on my reading, yes, I think Weinhold would make exactly this kind of argument. I am ill-equipped to discuss in detail the validity of such an argument, however—though I think that there is at least qualitative, maybe semi-quantitative, value to it.

Not the answer you're looking for? Browse other questions tagged computational-chemistry orbitals theoretical-chemistry resonance intermolecular-forces or ask your own question.

22
What is natural bond orbital theory used for?
9
Born-Oppenheimer Approximation reloaded
8
Trying to understand the statement: 'Resonance is not a flickering between the contributing states. '
6
On the spin-adaptation of 2nd order Møller-Plesset perturbation theory
3
What does "the natural bond angle" mean in the context of Universal Force Field (UFF) potential energy calculation and how are bond angles calculated?