NMR: How the relaxation times T1 and T2 depend on the correlation time / amount of molecular tumbling.

Why do nuclei that have a smaller / faster correlation time have a higher / slower T1 / T2?

To me, logically, it'd make sense that if a molecule tumbles faster then the relaxation should be faster, not the other way round. Can anyone explain this?

First recall that the T1 and T2 times reflect different things in the NMR experiment. T1 is the decay of population back to equilibrium and T2 is the decay of the coherence between the spins so we expect them to behave differently in different solvents.

Because of the interaction with other nuclear spins in the molecule, and with electrons in the solvent molecules as they tumble around in solution, the individual magnetic moments making up the magnetisation experience slightly different local magnetic fields. These fields change in time (because the molecules are tumbling in solution) and induce random transitions between the NMR spin states and these random transitions must cause the magnetisation to decay back to equilibrium. The main causes are

(a) Rotational Diffusion. Molecules interact via dipole-dipole coupling which changes as the molecules rotate and/or diffuse. Rotational diffusion is a major cause of decay.

(b) Spin-Spin interaction. This is a direct effect caused by any paramagnetic species, eg. O$_2$ and can be dominant in aerated solutions. It occurs because the magnetogyric ratio ($\gamma$) for paramagnetic molecules and ions is approx 1000 times greater than for nuclei.

(c) Chemical Shift Anisotropy. The shielding observed in chemical shifts is due to the locally induced magnetic fields. As a molecule tumbles in solution, its position with respect to the external field $B_0$ changes and this acts to reduce the magnetisation because, from the molecule's viewpoint, the external magnetic field now appears to be randomly varying.

Solvent motion is characterised by a correlation time $\tau_c$ describing the angle that a solvent molecule has at any time $t$ compared to the angle it had at time zero, clearly this will depend on the nature and viscosity of the solvent. The correlation time can be considered as the tumbling (rotational diffusion) time of a molecule in solution, and is proportional to the solute size and solution viscosity.

Population decay T1 occurs fastest when motion of solvent is of same frequency as transition frequency, so is most effective close to transition (approx RF) frequency, say, 400MHz and so T1 times are short. (You can think of this, classically, as two oscillators of the same frequency becoming in resonance with one another and so are able to interact maximally).

In solvents with long correlation times motion is too slow to cause transitions and the solvent can be likened to an effective static average field and so interact only slightly and T1 times are long.

In solvents with short correlation times these can be so short that they present only an average field to the nuclear spin i.e. they move very fast compared to the solute's motion, and so interact only slightly and T1 is long. The effect this has is shown in the figure.

T2 dephasing time is unaffected by fast solvent for the same reasons as for T1 just described, but because T2 depends on dephasing between spins, which has a range of low frequencies, therefore T2 is sensitive to slow solvent motion (i.e. is in resonance with slow motion) and decreases as $\tau_c$ increases. 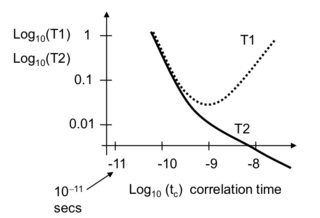 Relaxation is often very counterintuitive and isn't a particularly easy subject to understand, so it's not always useful to argue based on what seems to be logical. I'm not sure where you're studying this from, but it seems to be slightly lacking in the detail needed to properly understand what's going on. Here is a brief overview of what's going on, but I strongly recommend consulting a textbook which will explain it in more detail. Chapter 9 of James Keeler's Understanding NMR Spectroscopy (2nd ed.) is a very good reference. You can find a pdf of the corresponding chapter in the previous edition here.

The link between rate of tumbling (correlation time, $\tau_c$) and the "amount of fluctuations at the right frequency" is given by the spectral density

This function tells you how much the random fields are fluctuating at each frequency $\omega$. For relaxation, the important frequency to look at is the Larmor frequency $\omega_0$, i.e. the central quantity is

4
How many signals would be seen in total in the 13C NMR spectrum
13
Can the amount of shielding in proton NMR caused by ring currents be predicted?
6
How to assign the signals in the H-NMR of Aspirin?
7
How to predict the 31P NMR spectra?
10
Historically, how was the connection between NMR peaks and hydrogen atoms made?
6
Does vibrating an NMR sample produce the same benefits and artifacts as spinning an NMR sample?
3
Derivation of the form of the time correlation function in NMR spectroscopy
3
DOSY-NMR: How to calculate the volume of the molecule from the diffusion coefficient?
5
How does the presence of various NMR active nuclei in a compound affect coupling and signal multiplicity?