Why does standard reduction potential get multiplied by the change in oxidation state and not by the number of electrons transferred?

The whole basis of Frost diagrams is to have a graphical representation of the Gibbs free energy of formation ($\Delta{G}_{f}$) of different oxidation states of an element using the proportional relation between Gibbs free energy and standard reduction potential:

From which we can derive:

Thus, if we graph $nE^{o}$ against the oxidation number (N), we can accurately describe the relationship between oxidation state and ($\Delta{G}_{f}$).

I encountered a problem in Shriver's Inorganic Chemistry that asks to draw the Frost diagram of oxygen from its Latimer diagram.

Construct a Frost diagram for oxygen from the Latimer diagram below. 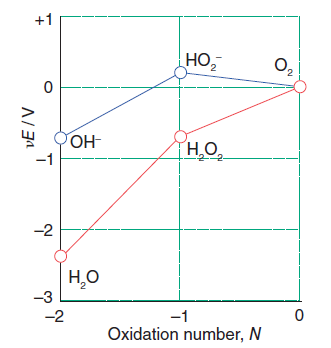 Browse other questions tagged inorganic-chemistry thermodynamics redox free-energy or ask your own question.