This is in contrast to the usual mechanism taught at an undergraduate level, where the anionic Meisenheimer complex is considered to be an intermediate:

What is the current consensus on the mechanism, and what evidence is there for it?

TL;DR Most SNAr reactions proceed via concerted mechanisms without a discrete anionic intermediate. This is typically the case when there is a good leaving group (e.g. chloride or bromide) and if the ring is not extremely electron-poor.

Over the years, there has been increasing evidence of concerted nucleophilic substitutions at sp2-hybridised carbons. One notable example was published by Neumann et al. in 2016, who studied the mechanism by which PhenoFluor (2) converted phenols to aryl fluorides:[1]

For the conversion of [1,1′-biphenyl]-4-ol to 4-fluoro-1,1′-biphenyl (i.e. the above reaction with a phenyl substituent at the para position), a 16O/18O kinetic isotope effect of 1.08 ± 0.02 was observed. This implies that Ar–O bond breaking takes place in the rate-determining step, which is inconsistent with the traditional stepwise mechanism. The concerted mechanism shown above was further supported by DFT studies which revealed a transition state 4 with partial C–O and C–F bonds.

Building on this, Kwan et al. went one step further to show that many SNAr reactions were indeed concerted.[2] In particular, for three examples, the authors used 13C/12C kinetic isotope effects to evaluate the mechanism. These KIEs were determined by integrating the 13C satellites in 19F NMR spectra (an adaptation of Singleton's method[3] which improves sensitivity).

The presence of a (primary) 13C/12C KIE suggests that the C–X bond is being broken in the transition state. However, the KIE itself does not a priori differentiate between stepwise and concerted mechanisms, since in both pathways the respective rate-determining steps involve weakening of bonds in the transition state. In order to identify the mechanism, the authors compared the experimental KIE to a calculated "maximum" KIE. Compounds with stronger bonds (such as C–F in 6) have more vibrational zero-point energy to lose in the TS, and hence have larger maximum KIEs (1.070 for reaction 1). 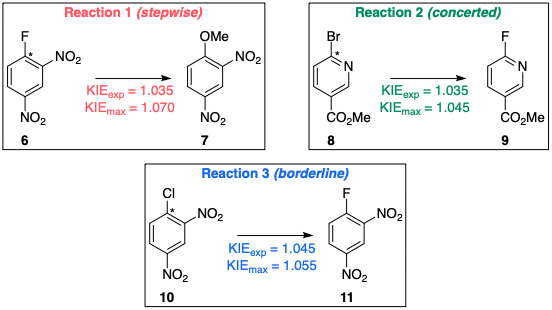 For a concerted mechanism which "alters both bonds simultaneously", the ratio $\mathrm{{KIE}_{exp}/{KIE}_{max}}$ is expected to be large; and for a stepwise mechanism which "alters one bond at a time", $\mathrm{{KIE}_{exp}/{KIE}_{max}}$ is small. [The paper does not go into detail about exactly why this is so; I suggest reading pp 225 onwards of an article by Westaway[4] which explains this in the context of SN2 reactions.]

This allows the three reactions above to be classified into three different categories:

For the concerted pathway, DFT calculations revealed that the transition state was essentially a Meisenheimer complex: the ring bears a significant amount of negative charge, is no longer aromatic (as indicated by NICS values), and NBO analysis shows that the electron density in the TS is mostly described by the Lewis structure of the Meisenheimer complex. Consequently, even though many "textbook" SNAr reactions are in fact concerted and not stepwise, the same factors that stabilise the previously purported intermediate (electron-withdrawing groups at 2- and 4-positions, and heteroatoms in the ring) also stabilise the transition state and facilitate the reaction.

Finally, a range of SNAr reactions on different carbocyclic and heterocyclic rings were then surveyed by DFT. It turns out that, at least within the scope of the reactions investigated: