How long does a linear hydrocarbon chain have to be before we call it polyethylene?

Might be a really silly question here but here goes. Polyethylene is a polymer with a repeating unit of just 2 carbon atoms attacked to 2 hydrogens each which connect to other repeat units.

This structure is just an aliphatic hydrocarbon like butane or hexane or decane etc. My question is, at what carbon chain length does a hydrocarbon cease to be a normal alkane but instead becomes a polymer?

Smaller alkane molecules you are referring to, are oligomers. IUPAC defines the prefix oligo- as follows [1, p. 1353]:

oligo:
A prefix meaning 'a few', and used for compounds with a number of repeating units intermediate between those in monomers and those in high polymers. The limits are not precisely defined, and in practice vary with the type of structure being considered, but are generally from 3 to 10.

At the same time removing numerical restraints when referring to oligomer molecules [2, p. 2289]:

Obviously, the boundary between oligomers and polymers is blurred. Usually for the emergence of "polymer" sufficient degree of polymerization $N$ starts with $10^2 - 10^4$ for synthetic polymers and about $100 - 200$ for globular proteins. 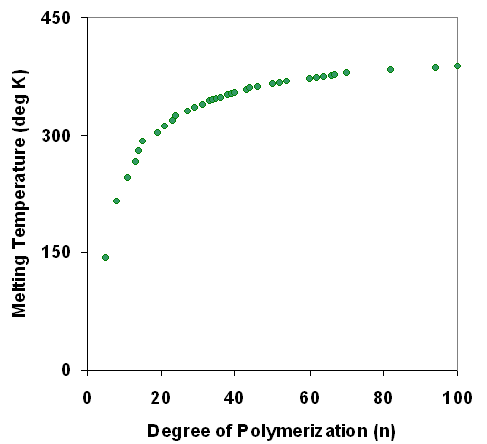 It's rather molecular mass concept. According to normatives, MM of polyethylene is from tens of thousands units to several million. So molecule must weight at least 10000 to be considered polyethylene (otherwise it can be named as oligomer of ethylene). But I should mention that there are no precise "threshold" like "10-100 monomers = oligomer, 100+ - polymer", though some textbooks give these (or other) numbers. Line between them is pretty vague to be explained with one simple number. Line is "drawn" by their properties.

4
How long can polyethylene molecules be?
12
If polyethylene glycol (PEG) is hygroscopic, how does it protect wood?
0
Why is nylon durable and how does it have such exceptional strength?
3
How long does it take to replicate Friedrich Wohler's synthesis of urea?
0
How many resonance structures does the oxalate ion have?
0
Is it possible to have an allotrope of carbon as a long unbranched chain of itself?