I need to predict the geometry of Dichlorine monoxide, using the main link theory: Lewis model, VSEPR and hybridization of molecular orbitals.

First, the Lewis structure is a graphical representation of the pairs of electrons bonding between the atoms of a molecule and the pairs of solitary electrons, which may exist.

We proceed to predict the geometry of the electron and molecular pair of the chemical species, using the VSEPR model, which is based on the number of electron pairs of the central atom (oxygen) to determine it.

As we have previously stated, the central atom is oxygen. The number of electron pairs of oxygen is four, of these four: two are shared and two are bonding. Therefore, electronic geometry is tetrahedral and molecular gometry is angular: 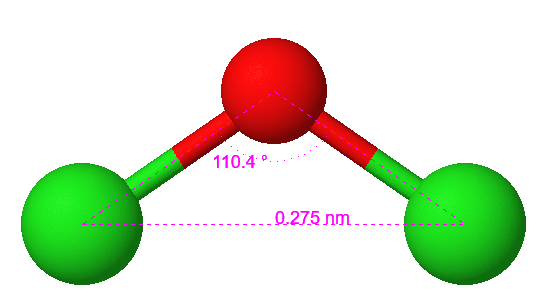 To conclude, we will explain geometry by hybridization of atomic orbitals. Orbital hybridization is simply the linear combination of the mathematical expressions of the wave functions of the orbitals. We know that there are two types of overlaps:

Here I am asked to study the different overlaps that occur and to explain the consequences on the geometry of that overlap. I suppose there will only be sigma overlap because there are no multiple links. But I can neither say nor explain with certainty what type of overlap and between which electrons or atoms there are and, finally, explain the relevance of this in geometry.

Likewise, ideally the angle should be 120º, but experimentally it is 110.4º. This decrease is due to the presence of two pairs of solitary electrons in the oxygen atom, isn't it? Is there any way to determine such an angle other than in the laboratory, any formula or relationship?

84
What is Bent's rule?
42
Are the lone pairs in water equivalent?

54
How do I figure out the hybridization of a particular atom in a molecule?
4
Asymmetry in trigonal bipyramidal geometry
3
Electron Pair Geometry in Ibuprofen (Electron Pair Geometry in Organic Compounds)
7
Why an asymmetric geometry with sp3d and sp3d3 hybridization?
2
Is the VSEPR theory correct in determining the bond angle of sulfur dioxide?
1
Why is the molecular structure of water bent?
3
Molecular geometry of BaH2 according to VSEPR theory