Connection of term symbols with specific microstates for atomic carbon

I'm currently studying atomic term symbols. I wanted to try it on a simple atomic carbon with the electron configuration $1s^22s^22p^2$.

I know, that only open-shell electrons are involved in the term symbol classification, so that leaves us working with solely 2 electrons in $2p$ sub-shell.

The microstates are listed in the following table: 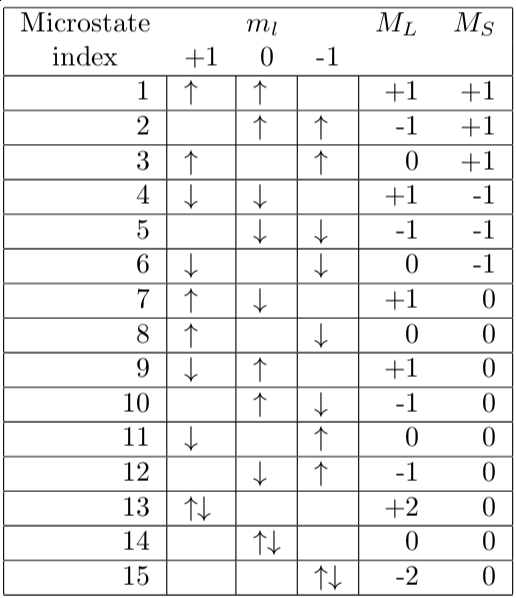 And, if I understand it correctly, we can categorize them into several "subsets" labeled with the corresponding term symbols.

Using the same formula, ${}^3P$ is going to contain 9 microstates.

With the "substraction method" described in this video, we can arrive to the conclusion, that both ${}^1P$ and ${}^3S$ won't exist.

Now I know the possible term symbols, but I'm not sure, which microstates belong to them specifically.

I don't understand this point, as even $J=2$ for ${}^1D$, so it can't be used to distinguish among the "similar" microstates and to assign them properly.

To add on to what Feodoran has mentioned, you might be interested in looking at the Clebsch–Gordan coefficients, which are essentially the coefficients of the microstates in the term symbols. You can look these up in e.g. the appendices of Atkins Molecular Quantum Mechanics, 5th ed. Note that each term symbol is a collection of states, so a $D$ term (for example) which has $L = 2$ would comprise five states: one each with $M_L = -2, -1, 0, +1, +2$. These five states can in general be denoted as $|L, M_L\rangle$.

Now, in general each coupled representation $|L, M_L\rangle$ will be a linear combination of the microstates, or uncoupled representations $|m_{l1},m_{l2}\rangle$. It is in general not possible to construct a state which is simultaneously an eigenstate of $L, M_L, m_{l1}$, and $m_{l2}$, because the relevant operators do not commute (refer to Atkins or any other QM text on coupling of angular momentum). There are examples of one-to-one correspondence between the coupled and uncoupled representations – for example, microstate 13 perfectly corresponds to $|L = 2, M_L = +2\rangle$, but it is not general, so:

It's slightly more confusing because there is a spin component as well, which the coefficients do not cover, and this is why I've given a handwavy "combination of microstates 8 and 11". This "combination" is needed to generate the singlet spin wavefunction $2^{-1/2}(|\alpha\beta\rangle - |\beta\alpha\rangle)$.

As an aside, the familiar singlet and triplet spin wavefunctions

are also coupled representations. These four wavefunctions are, respectively,

and so we can see a simpler example of how the coefficients link the two representations:

When you are done there will be 15 valid combinations. Arrange these on a 3 by 5 grid. Three for the $M_s$ and five for the $M_L$ and at each intersection put the number of times these values occur. For example there is 1 value with $M_L=1, M_s=-1$ and 3 with both values of zero.

Not the answer you're looking for? Browse other questions tagged physical-chemistry quantum-chemistry electronic-configuration or ask your own question.