Enantioselective catalysis is one of the important reactions in Organic chemistry which has huge applications in practical basis for synthesis of optically pure natural compounds. In this respect, I came across the following reaction of Aldehydes aimed towards converting them into Chiral alcohol with large enantiomeric excess with the help of (-)-3-exo-(dimethylamino)isoborneol [( -)-DAIB] catalyst.

The structure of (-)-DAIB is given as below, 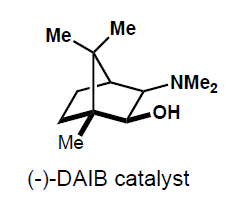 The reaction is given as,

If we slightly rotate the molecule and visualise, we will see that here the methyl group has come from the top side of the molecule,i.e. a si-face attack by methyl group on benzaldehyde has occured.
From the picture of the transition state also this picture become clear,( According to our reaction $\ce{R''}$ is methyl and $\ce{R'}$ is Phenyl in the picture) 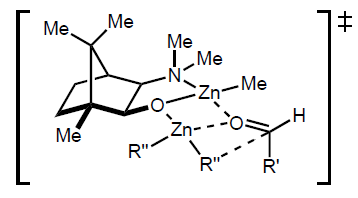 Browse other questions tagged organic-chemistry stereochemistry catalysis stereoselectivity or ask your own question.

4
Friedel-Crafts Alkylation and hybridization
5
Most stable conformation of aldehydes and ketones
0
Perkin reaction for aliphatic aldehydes
6
How is the configuration of an ester enolate double bond assigned according to CIP?
11
Why do Grignard reagents add to propargyl alcohols?
10
Why is nitrosobenzene electrophilic on O in organocatalytic oxygenations?