I was wondering why the second order Jahn-Teller effect is also said to happen for many d0-systems? It makes sense to me that due to relativistic effects and the stabilization of the s-Orbital and destabilization of the d-orbitals the energetic gap between the let's say eg in an octahedral complex and the above laying unoccupied a1g s-orbital becomes small enough that, for the right amount of electrons filled into the d-orbitals a mixing of both states is of some advantage leading to a second order Jahn-Teller effect like in Hg(II) compounds. But why does it also happen to d0-complexes?

My suggestion would be that we cannot discuss any field splitting in the first place. So first of all, how would any distortion here give us an energetic advantage and then also we would have to take the nephelauxetic effect of the host or ligand more into consideration if we do not consider a real crystal field splitting. I don't really know where a methyl ligand would be considered in the nephelauxetic series (since some heavy transition metal methyl complexes form trigonal prismatic complexes rather than octahedral ones, which is often explained with a second order Jahn-Teller effect) but if I consider some covalency in this metal-carbon bond then it may shift the d-orbitals down enough so they could perhaps mix with the lower occupied p-Orbitals. So that perhaps the mixing is not between occupied d- and unoccupied s-orbitals but between occupied p- and unoccupied d-Orbitals.

I was reading an article on the second order Jahn Teller effect yesterday and found the following line: 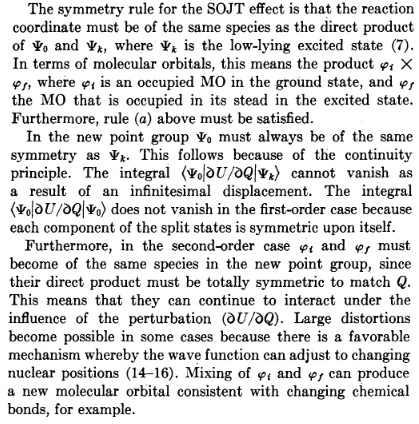 I am not sure if I got all those rules correctly but it seems like I have to consider the product of both states and the product has to be of the same symmetry. If I think about the next low lying occupied orbital in an octahedral environment it would be the filled t1g Orbital. So This would mean I have to consider a t1g and t2g mixing here. I have no clue about those irreducible representations and point groups but from the tables you can find on the net I found that a multiplication of T1 and T2 in Oh point-group would end up in an A2 + E + T1 + T2. As this contains both T1 and T2 I guess it will somehow obey those rules.

Perhaps someone with more experience in symmetry and character tables might have suggestion about this.

I won't discuss the symmetry parts, simply because I have no clue about symmetry and point groups and transformations. I copied the original description for the necessary relationships for a second order JT-effect to happen in the question, so if you know more about this you can probably confirm that.

You can also see this in the appendix of the book: T. A. Albright, J. K. Burdett, M.-H. Whangbo, Orbital interactions in chemistry, second edition, Wiley, 2013. 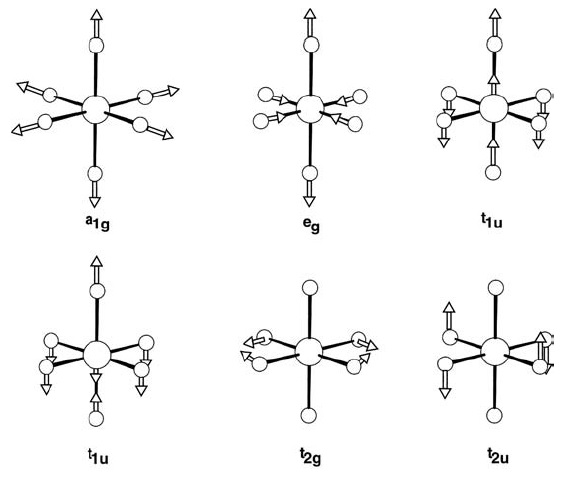 The next question is, why does this stop at the trigonal prism and not continue in mixing the other states as well? And the answer is, for some hypothetical hydrides this seems to happen. While in a d2 complex the new $\mathrm{a_{1}'}$ is filled and therefore an elevation in energy quite unvavorable a d0 complex should further distort. Then $\mathrm{a_{1}'}$ and $\mathrm{a_{2}''}$ mix and distort along a normal mode of $\mathrm{a_{2}''}$ symmetry that changes the trigonal prism $\mathrm{D_{3h}}$ to something they call pyramidalization with $\mathrm{C_{3v}}$ symmetry. This step can also be achieved directly from the octahedron by mixing all orbitals at once and twisting a triangular face of the octahedron. 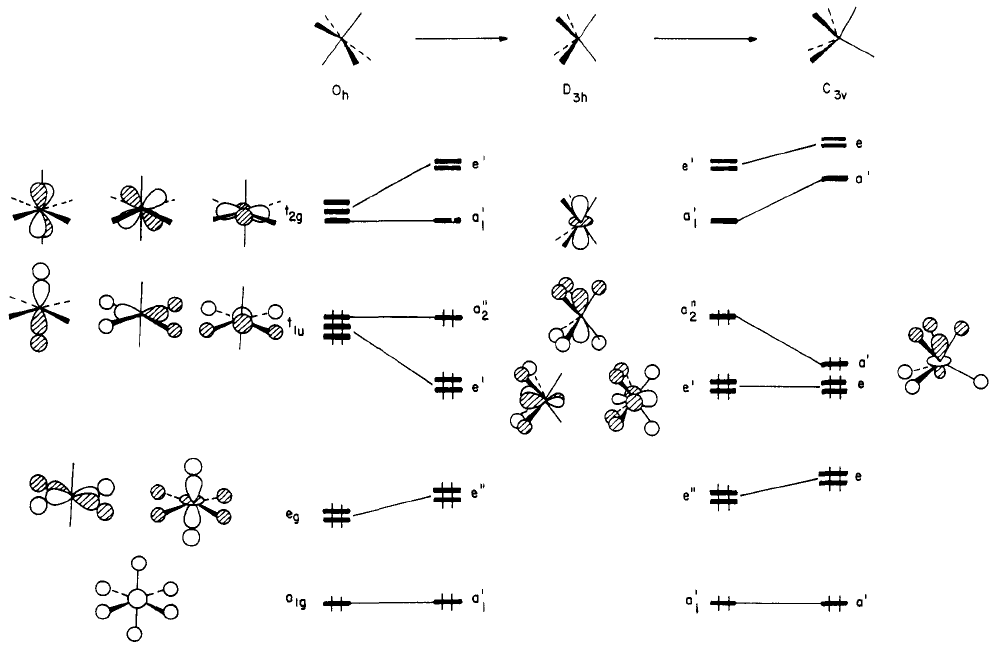 Now the final question was, why do we observe so many trigonal prisms then? And their final remark on this (unless I skipped something) that it's about the ligands. What ligands favor a second order Jahn-Teller effect for a d0 metal center? Basically only strong σ-donors. They mustn't have any π-donating effects. Since the HOMO LUMO gap has to be quite narrow the $\mathrm{t_{1u}}$ orbital has to be high. So no electronegative ligands. But also the $\mathrm{t_{2g}}$ orbitals have to be low, so a strong ligand splitting is favored but in a way that the $\mathrm{t_{2g}}$ is lowered. And most probably a strong nephelauxetic effect is advisable as well. This leads to alkyl and hydride as possible candidates. For the hydride many of the desired complexes are just unknown but the calculations show that is could distort to $\mathrm{C_{3v}}$. For the alkyl like many prismatic organometallic alkyl complexes we know the methyl seems to be to bulky to stabilize the pyramidal structure.

In the same sentence they also mention that for example alkoxides are not forming prisms. So this leaves me with the question how Mo-S or W-O structures in solid state still show the trigonal prism. But that has probably different reasons so I'll exclude them here.