I was asked the following question:

First of all I figured out the following four geometrical isomers of the above complex: 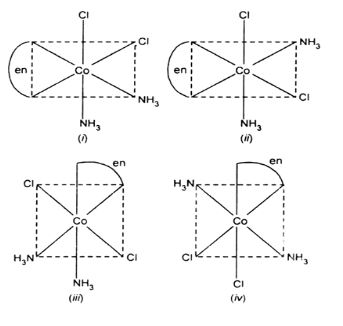 Out of which, (iii) and (iv) are optically inactive, due to a plane of symmetry (shown by faint line) passing through them as shown below: 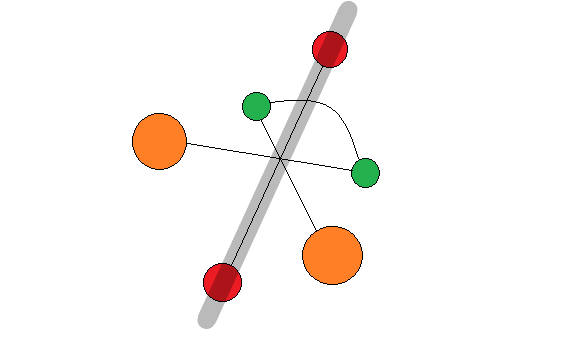 But, the following four isomers was provided as answer, in which I don't think that the second configuration of complex will show any optical activity due to plane of symmetry (as discussed above for the (iv) geometrical isomer). 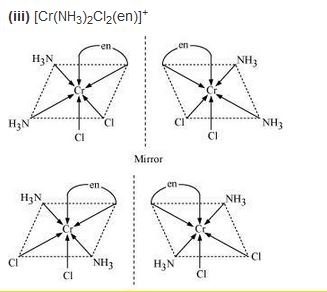 What I am doing wrong?

I came to the same conclusion as you, total 4 stereoisomers (2 of them create one enantiomeric pair).

In the 3rd party solution, they depict the same isomer at bottom, i.e. only 3. The missing one is that with two $\ce{NH3}$ ligands in the same plane with $en$, and $\ce{Cl-}$ ligands in straight line (trans), perpendicular to that plane (not that horizontal, which is depicted)

Here is my simplified schematic representation of the octahedral complex with ethylenediamine ligand bound by back-pointing bonds in horizontal plane, hidden; the rest is vertical axis and two front-pointing horizontal bonds (seesaw geometry, not to be confused with Fischer projection for tetrahedrals!) Dotted line is mirror plane, equal sign means identity (by 180° rotation around observer-to-model-line axis). 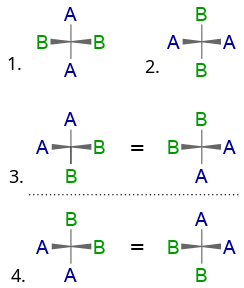 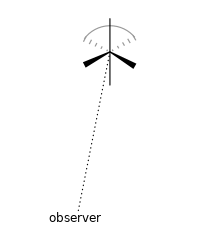 If A and B are in the plane then there are two possibilities how to relatively place A and B in the perpendicular axis (resulting in mirror images),

8
Optical isomerism in Co-ordination Compounds
15
Mismatch of plane of symmetry vs Gold Book's definition for a pseudochiral carbon
3
How many stereoisomers are possible for 1,2-dimethyl-4-(propan-2-ylidene)cyclopentane?
2
What is the number of stereoisomers for hex-4-en-2-ol?
6
Ionization isomerism in coordination compounds
1
Optical activity of cis coordination compounds
4
Mechanism for the reaction between trisilylamine and hydrogen chloride
0
Will the following complex show optical isomerism
0
Which are the Geometrical isomers of the complex [Cr(NH3)2Cl2(en)]+?Is it one or two?
8
Why are complexes of type MA3B3 not optical active?