Alpha-Tetralone is reacted by $1.\ce{Zn(Hg),HCl}\ \ 2.\ce{ Pd/C}$ What is the product and mechanism that is followed for the 2nd reaction?

A book by SN Sanyal says that Naphthalene will be produced . I know that in the 1st reaction, clemenson reduction is followed thereby reducing the Carbonyl group to $\ce{CH2}$ group .Then how the reaction proceeds is not clear.

I may be wrong of the 1st step also. Please correct me.

Moinak Banerjee: Your concern about the mechanism of the conversion of tetrahydronaphthalene (tetralin) 1 to naphthalene 5 has been addressed in a comment by Waylander. It is important to recognize that the process is a 4-electron oxidation of tetralin 1 and a four electron reduction of the hydrogen that is liberated as 2 equivalents of hydrogen gas. Ideally, the reaction is catalytic in palladium (Pdo). Mechanistically, the reaction likely proceeds by oxidative addition of Pdo into the labile benzylic C-H bond of tetralin 1 to afford Pd(II) species 2, which, in turn, isomerizes to π-complex 3. These steps are shown as reversible because complex 3 is the likely intermediate in the hydrogenation of 1,2-dihydronaphthalene 4 to tetralin 1. Collapse of complex 3 regenerates the catalyst Pdo and an equivalent of hydrogen gas. A repetition of these steps at either the benzylic or allylic C-H bonds of 1,2-dihydronaphthalene 4 leads to naphthalene 5 and a second equivalent of hydrogen gas. These reactions are driven to the right by the loss of hydrogen gas in an open vessel. --continued-- 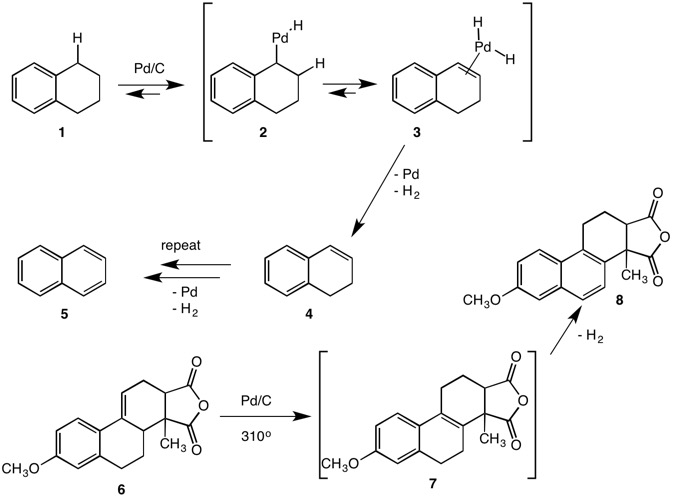 This reaction played a critical role in early attempts to synthesize estrone since it served to reduce the number of asymmetric carbons, thereby facilitating stereochemical analysis. An example of this process is illustrated in the sequence 6 --> 8 from the work of Bachmann and Chemerda1. The double bond in tetracycle 6 is isomerized by Pdo to the tetrasubstituted position in isomer 72. The conversion to the naphthalene 8 follows the same steps as in the case of 1,2-dihydronaphthalene 4.3

3
Synthesis of 2-benzylcyclohexan-1-ol from cyclohexanone
5
Chemoselectivity in reduction of 3′-nitroacetophenone
2
Deuteration of enone - mechanism?
14
Does RedP+HI reduce all carbon functional groups to alkane?
3
Reduction of nitro compound using protection group
4
Does presence of alkyl groups on alpha carbon increase yield of alkane in Kolbe's Decarboxylation?
1
How does Al-Hg react with carbonyl in presence of concentrated HCl?