I am currently doing a experiment in the lab which is using a continuous wave NMR, by sweeping the magnetic field, and I am having trouble understanding how the theory works for this type of experiment.

So I currently understand if a proton is not placed in a magnetic field it will spin on it axis of rotation due to the magnetic moment.

My first question is on what causes this magnetic moment, from what I have found so far that the proton can be modelled a sphere with infinitely many of tiny circular current loops which run along the axis, but what I can understand is that for a dipole moment to be formed a current going in a circular loop generate the dipole moment.

So dose the dipole cause the proton to spin which generates the magnetic moment and if so what causes the tiny dipoles along axis? It seem to me there a rotation being caused by a rotation.

Now applying this to a sample of high hydrogen 1 like glycerine that has been place in CW NMR. When the sampled is placed in the static filed according to the Boltzmann distribution there will be more protons parallel to the field that non-parallel so now in cw as I understand a constant RF signal is being applied and a varying magnetic field perpendicular to the static field.

So my second question is

I believe it dose as this would explain the nmr of glycerine that was take in the lab, as show below. 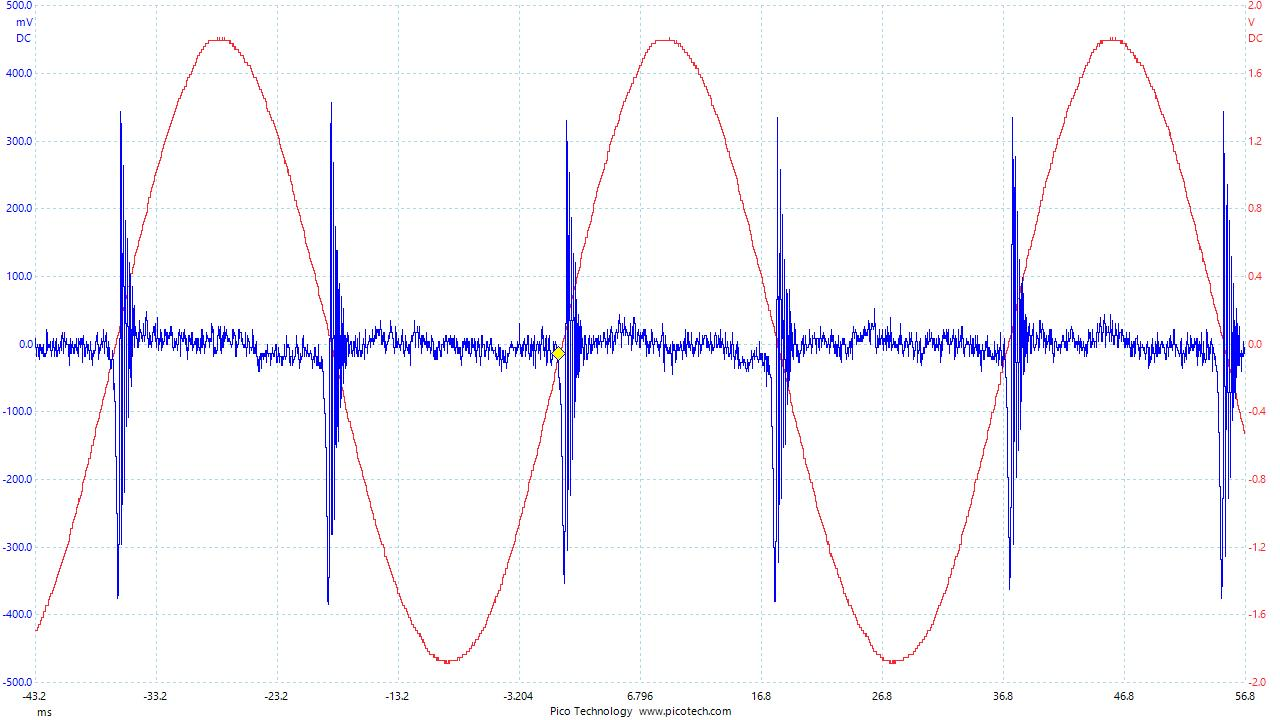 Now the real trouble I am having with these graphs is that one it looks to me that there is a dampening effect occurring, which I believe to be the relaxation time of the sample, but what I cant visualise is how the resonance is occurring within the sample it self in terms of the physics with respect to all the protons precessing.

Are the individual proton within the sample at different depths become out of phase with each other and the varying magnetic field is decreasing over time, and why dose each resonance peak have a negative voltage associated with it? How dose this negative voltage tell me about what is occurring with in the sample?

If anyone could with any of the theory behind CW NMR and how the signals being receive can inform me on what occurring with in the sample it would, it would be appreciated. Thanks in advance.

Spin is a property predicted when relativity theory is applied to electromagnetic theory, leading to the Dirac equation. It is an intrinsic property of subatomic particles, like charge. It explains magnetic phenomena such as NMR. It is a quantum property of NMR active nuclei (when measured it takes on discrete values). For spin-${\frac{1}{2}}$ nuclei, it is related by a multiplicative constant to the magnetic dipole moment of the nucleus. Thanks to spin, nuclei have an intrinsic and fixed magnetic moment in an external magnetic field. One component of this moment adopts a discrete orientation with respect to the applied field. Depending on the orientation, two states of different energy, usually called $\alpha$ and $\beta$, are possible for a spin-${\frac{1}{2}}$ nucleus. We can define the resonance frequency in the presence of the external field using the equation you provide. For a spin-${\frac{1}{2}}$ nucleus it is proportional to the difference in energy between the $\alpha$ and $\beta$ states. It is the frequency at which the nuclear moment nutates about the applied field.

Does the varying magnetic field vary the energy levels until resonance occurs?

Yes. In the CW experiment, you measure the electrical signal induced by the sample in a pick-up coil while simultaneously irradiating the sample with a second orthogonal RF coil, and sweeping an applied magnetic field. The sweep alters the resonance frequency of the spins. When this frequency equals the irradiation frequency spins are excited and transition between the two states - this is resonance, the points at which the oscillating red curve (the field sweep) crosses the origin. The spins now oscillate together coherently back and forth between $\alpha$ and $\beta$ states, yielding a fluctuating magnetic field which induces an oscillating current in the pickup coil. As the field sweeps past the resonance point, the spins begin to lose energy - to relax. Relaxation causes the signal to eventually decay to the baseline.

Are the individual proton within the sample at different depths become out of phase with each other and the varying magnetic field is decreasing over time?

The NMR signal is an average, reflecting the behavior of a large ensemble of spins, acting coherently (nearly identically) during an experiment. The total signal is a sum over all excited spins in the sample. The applied field is as uniform across the sample as possible, so that all spins behave similarly. But in a way the spins act independently. Some oscillate faster or slower than the mean. The differences add up over time, leading to dephasing of the signal.

There is usually no spatial information in such an experiment unless special tricks are used.

This question is not clear. The spins exist in states whose coherent oscillations induce a sinusoidal magnetic field in the RF pickup coil. The electric signal induced in the pickup coil is an AC voltage, alternating between negative and positive values until it decays completely.

Not the answer you're looking for? Browse other questions tagged physical-chemistry nmr-spectroscopy or ask your own question.