How is fluorine gas contained and transported, why aren't the metal cylinder and tube in this video attacked?

I included the GIF below as part of an answer to Can paper burn without oxygen or air?. It was made from the video Fluorine - Periodic Table of Videos.

I noticed that the cylinder containing the fluorine gas "filled up on the roof" in the video looks like it is made out of metal, as is the tube feeding the gas to the combustion sample.

The liquification experiment also shown in the video uses a flexible tube that appears to be plastic.

I know hydrofluoric acid will dissolve gas, but can dry fluorine gas be contained in glass? Since metals, even precious metals are generally attacked by fluorine, how is it stored, and how are the metal cylinder and tube in the video not also consumed? 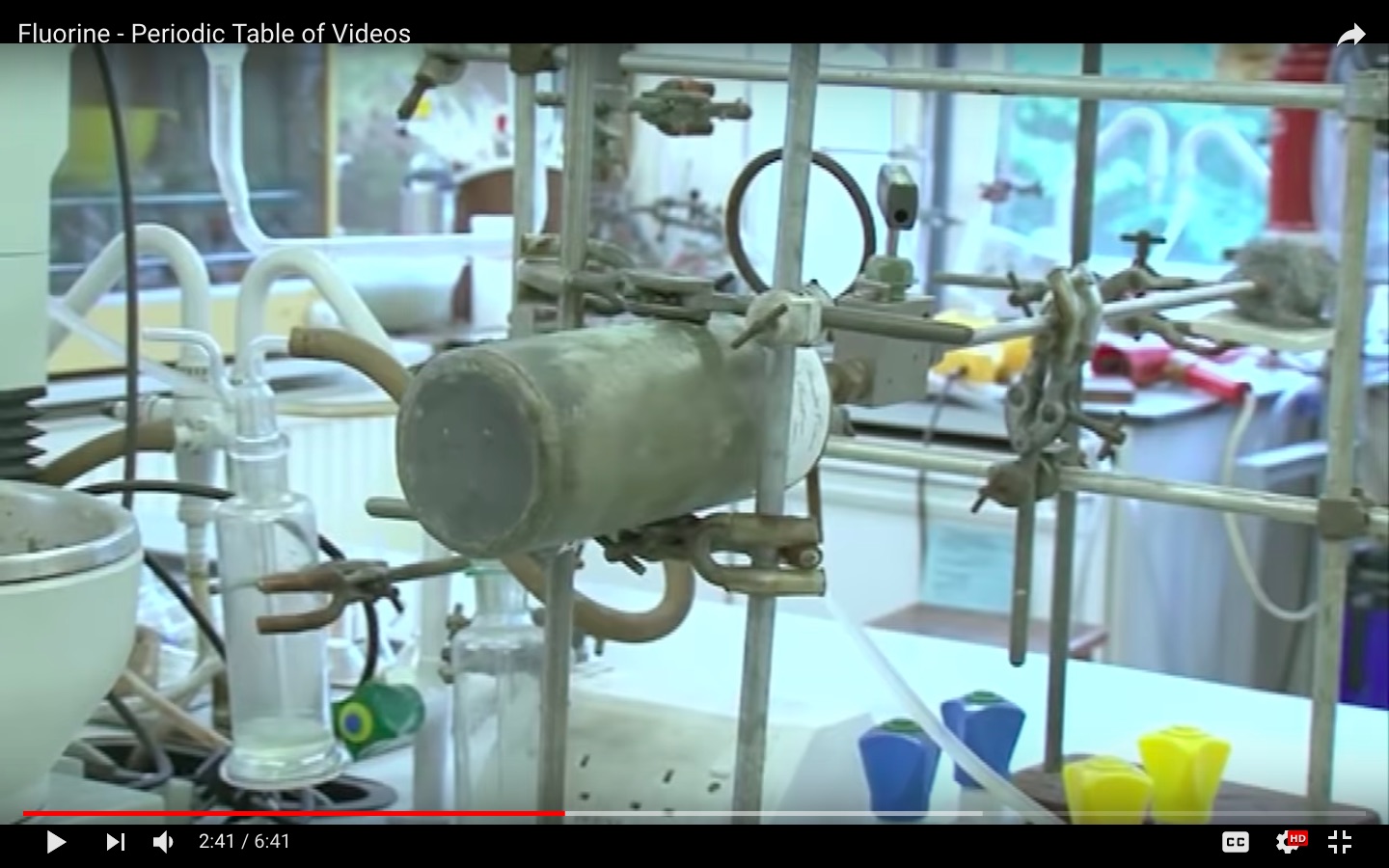 Incidentally you can look up individual elements on Periodic Table of Videos at http://www.periodicvideos.com/

I think it is mentioned somewhat around 4:35 or so in the link you added. The metal cylinder that has to store elemental fluorine will have to be made from a special metal like nickel or monel. Those form metal fluoride layers on the inside but they remain on the metal and allow no further fluorine to attack the rest of the metal which is called passivation.

About the plastic tube, it could be Teflon but I don't know if that works or not. Basically, the problem with fluorine especially about demonstrations was always the container. You could have easily done experiments in metal containers but then no one would be able to see through. Then there were, of course, fluorinated plastics but they tend to be quite rough and it all becomes blurred. Which is probably also the reason why there is no real fluorine ampoule for element collectors. That was at least how I understood it until quite recently when I was listening to a talk by Florian Kraus, who is a fluorine chemist. And they are using a special polymer that can hold fluorine and other highly fluorinating interhalogens but is much more transparent. So I guess by now there is quite a variety of polymers available that will hold fluorine.

Elemental fluorine could be stored in glass at least theoretically. It is not the fluorine that attacks the glass but hydrogen fluoride or I think even more precise something like $\ce{H2F^+}$. You could avoid that to some degree by drying the fluorine but the problem is the glass itself. As glass forms a polymer structure of $\ce{[SiO4]^4-}$-tetrahedra that join all vertices there has to be a sudden end once there is no more repeating unit added. But that would mean that the outside of a glass surface is all negatively charged (ignoring metal cation additives). Therefore there are many $\ce{Si-OH}$ groups on the outside which tend to be acidic. When fluorine reacts with them it will form hydrogen fluoride that will attack the glass.

Not the answer you're looking for? Browse other questions tagged reactivity containers or ask your own question.

12
Is there a way to contain fluorine gas for long term so that it can be visually observed?
8
Can paper burn without oxygen or air?
19
pH probe bulb - what is happening within the glass?

5
When, how and why does sodium metal react with cycloalkenes, cycloalkadienes, cycloalkatrienes?
3
Why is chlorine and not fluorine labelled as the most reactive halogen for halogenation?