Does resonance destabilize a molecule? 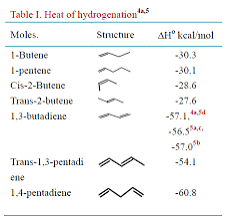 According to this table, more heat is released in breaking a single double bond in 1,3-butadiene than in trans-2-butene. Does this mean that the resonance of 1,3 butadiene leads to a destabilization of the compound?

None of the comparisons you might make suggests any sort of deatabilization by conjugation.

Finally, something a little more subtle is going on between 1-butene and 2-butene. There can no conjugation like that in 1,3-butadiene when only one double bond is present, yet 2-butene has clearly less energy to release by hydrogenation than 1-butene. Thinking of carbocation nomenclature, the former is a like a "secondary carbication by having an alkyl group on only one end of the double bonds, while the latter is "tertiary" with an alkyl group on both ends. Hyperconjugation, like that in carbocations, is at work here.

2
How can you predict relative Rf values of cis-trans isomers in thin layer chromatography?
5
How many stereoisomers are possible for hepta-1,6-diene?
6
Comparing heat of hydrogenation per mole of butenes and 1,3-butadiene
0
Reactivity order in hydrogenation reaction of but-2-yne and butene isomers
1
Why do the unsaturated ketones have C-O bond weaker than saturated ketones? How it is related to resonance structures?
3
Bond rotation in buta-1,3-diene