How does base size affect the ratio of kinetic/thermodynamic enolate?

However, in the table below we see that as the base becomes even more sterically hindered, the thermodynamic product is formed. It's never the main product but it does get produced a little bit more (1% to 10%). 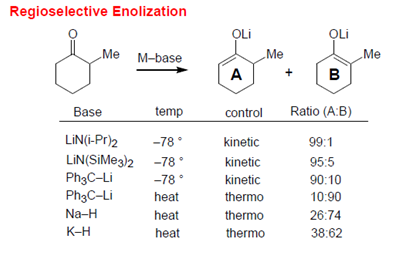 One problem with comparing product ratios using $\ce{LiN($i$Pr)2}$ vs $\ce{Ph3CLi}$ is that it's not really an apples-to-apples comparison - one is a lithium amide base, whereas the other is a alkyllithium that is highly stabilised by conjugation.

Regarding the first point, there have been dozens of papers looking into the structure and reactivity of lithium amide and alkyllithium bases, particularly by the research group of David Collum. LDA is probably the most heavily studied. It turns out that these species are much more complex than what is implied by the structural formula. For instance, LDA in a coordinating solvent, such as THF, exists as a disolvated dimer: 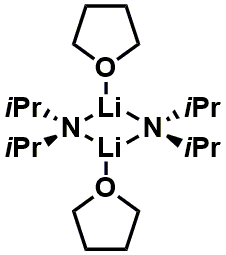 How does the steric bulk of this species compare to the LDA structure we normally draw? Likewise, what is the actual structure of $\ce{Ph3CLi}$ in solution?

Even with a particular solvent and conditions, transition states have been put forward for the deprotonation event that vary markedly in structural features between substrates. For example, in a review of LDA (Angew. Chem. Int. Ed. 2007, 46, 3002-3017), Collum and coworkers show the following two different transition state structures for deprotonation of an ester using LDA in $\ce{tBuOMe}$ vs THF:

So, if we can get a good idea of what the transition state for LDA vs $\ce{Ph3CLi}$ deprotonation looks like, the complexity is such that high level calculations, eg. DFT, would be needed to explore the difference in selectivity. Even if we could qualitatively say which transition state involves the more bulky species, there may be features of the transition state, eg. conformational, stereoelectronic, that only become apparent through the modelling. Sometimes, it's not just which reagent is bigger, but details of how the two reactants come together at the transition state that determines the favoured outcome.

Not the answer you're looking for? Browse other questions tagged organic-chemistry acid-base regioselectivity enolate-chemistry or ask your own question.

2
How to determine if a base is bulky?

5
Stereoselective enolate formation with different bases: Does the addition of a base NR3 to a ketone affords the cis or the trans enolate?
5
Product of intramolecular aldol condensation of 3-methyloctane-2,7-dione
5
Shouldn't the Hofmann product be preferred in this elimination?
10
How does Hofmann elimination work in this reaction?
3
LDA and an aldehyde
8
Nucleophilicity of sterically hindered enolates