Suppose we have two 0.1M solutions in water. What is their conductivity and how will it change when we mix them, and why?

Okay, so both are strong electrolytes and conduct well but what happens when they get mixed and why?

Both are weak electrolytes and will conduct electricity. Again, I don't know what happens after mixing and why?

Both strong electrolytes, they neutralize each other in a reaction. So, the result is no conductance (or very weak?)

Thank you for your answers.

The first case is pretty straight forward. As you mentioned, both $\ce{NaCl}$ and $\ce{KCl}$ are good electrolytes. Assuming the $\ce{NaCl}$ solution is there in a beaker, and you are adding $\ce{KCl}$ solution from a burette, the conductivity of the solution will not change significantly. This is because although two strong electrolytes are added, the number of ions per unit volume remains same as both solutions have the same concentration. However, none of $\ce{NaCl}$ and $\ce{KCl}$ will dissociate completely because of the common ion effect. This effect will, however, not be significant.

Let's consider the case of $\ce{HCl}$ and $\ce{NaOH}$ first. I will assume $\ce{HCl}$ is present in the beaker and $\ce{NaOH}$ is being added from the burette. The $\ce{OH-}$ ions being added will neutralise the $\ce{H+}$ ions from the solution immediately and will form the weakly ionising electrolyte $\ce{H2O}$. However the $\ce{Na+}$ ions and $\ce{Cl-}$ ions will remain in solution. So, effectively, $\ce{H+}$ is being replaced by $\ce{Na+}$. Since the ionic mobility of $\ce{Na+}$ is lower than the ionic mobility of $\ce{H+}$, the conductivity of the mixture decreases. However, the phenomenon reverses on reaching the equivalence point. After the equivalence point, there is no more neutralisation of $\ce{H+}$ and $\ce{OH-}$ and they remain dissociated in solution on further addition of $\ce{NaOH}$. So, the conductivity increases from this point until $\ce{NaOH}$ is added. Here is the conductometric titration curve 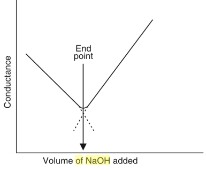 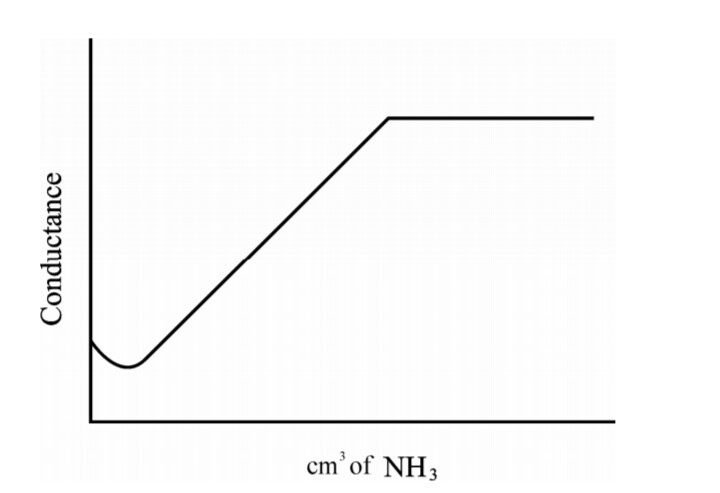 I think: A) When you mix both you have better conductivity by increment of ions in solutions.

C) When you mix both the conductivity increase (little) because you have complete disossiated ions (Na+ and Cl-) in the solution.

Not the answer you're looking for? Browse other questions tagged solutions ions or ask your own question.

12
Conducting current in electrolytes
1
Evaporation of a mixture of salts
1
Does the speed of an ion affect the current that can flow through a solution?
2
Are Na and Cl ions from NaCl in water separate charged particles?
1
What is the reason for strong acids/bases dissociating in water?
4
How can I calculate the molar conductivity of a solution with multiple solutes?
4
Kohlrausch Law and conductivity
1
Ionisation vs Dissociation