Why does water volume decrease when salt is added? [duplicate]

Ask Question
Asked 7 years, 9 months ago
Active 2 years, 2 months ago
Viewed 12k times
10
$\begingroup$
This question already has answers here:
Why there is no change in water level when salt is added? (3 answers)
Closed 2 years ago.

Why does water volume decrease when salt is added? Our teacher asks us in the class but I don't find any strong reason.

What you are experiencing is the phenomenon of partial molal properties - components of a mixture contribute unequally to the properties of the mixture.

Sometimes the components of a mixture do not contribute linearly to the properties of a mixture. A well-known example is the water-ethanol system, which has negative excess volume. When 5 mL of water and 95 mL of ethanol are mixed, the final volume is less than 100 mL. See the following graph constructed by Wikipedia user Wilfried Cordes: 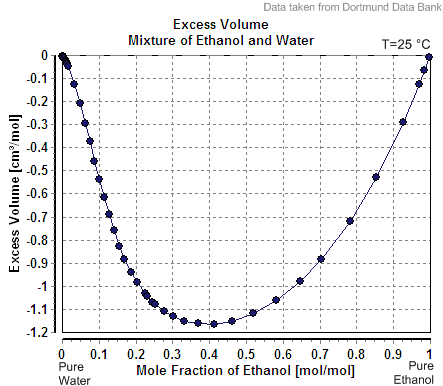 Similar behavior is occurring in your sodium chloride and water system. Now, as for why these phenomena occur, a lot of it has to do with intermolecular forces. For example, you could consider that the hydrogen-bonding and dipole-dipole interactions between water and ethanol are perhaps stronger than between water and water or ethanol and ethanol. Additionally, water molecules are smaller than ethanol molecules. There is also a thermodynamic consideration. This state of affairs must represent minimum free energy (maximum entropy).

How can you relate the interactions of sodium and chloride ions with water to the observation of negative excess volume?

Not the answer you're looking for? Browse other questions tagged physical-chemistry everyday-chemistry water or ask your own question.

17
Why there is no change in water level when salt is added?
1
Does the level of water go down when you add salt to it?
4
Does adsorption occur between liquids?
6
How do I analyse this data? (optimization experiment)

48
Why does ice water get colder when salt is added?
0
Which of these compounds does not liberate heat when water is added to it?
17
Why there is no change in water level when salt is added?
7
Is there a soluble salt, or compound that when dissolved in water results in a solution with density less than pure water?
1
How does changing volume affect concentration of solutions?
4
Why does pool chlorine smell only when wet?
51
Why don't we explode after drinking water?
6
Scientific Reason for Salt Solution Gaining Volume