Why does a catalyst increase the forward and reverse reactions equally

With reference to the picture below, how is it that when there is a lower activation energy (due to the alternate reaction pathway provided by the catalyst) that the catalyst will increase the forward and reverse reactions exactly the same amount. 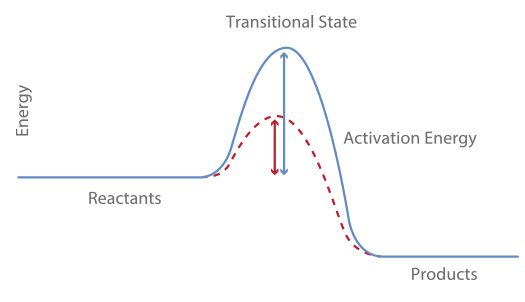 The equilibrium is unaffected because the barrier to both forwards and back reaction is reduced, and even though the amount is constant it works out that this effect cancels out. This is a consequence of the fact that the population of energy levels is exponentially distributed from the Boltzmann distribution. This also leads to Arrhenius type rate expressions.

15
Won't the net effect of a catalyst be zero if it creates a new path with lower activation energy?
1
Do catalysts shift equilibrium constant towards 1?

0
Why does increasing the available surface area of a pure solid not effect equilibrium?
1
When volume decreases and the product has less moles than reactants, why is there no increase in the reaction quotient?
2
Relationship between a temperature increase of an exothermic reaction, Keq, and kf (forward rate constant)
2
Do catalysts increase the rate of exothermic reaction more in a reversible reaction?
5
Intuition for why catalyst affects both forward and reverse reactions equally?
4
Same Activation Energy for Forward and Backward Reactions
2
Changing pressure on equilibrium
1
Equilibrium constant of a reaction whose order of forward and reverse reaction is not same