Because $\ce{Li2}$ is homonuclear, the weight that imposed on each $\mathrm{2s}$ $\ce{Li}$ atomic orbital would be almost the same. Even though $\ce{Li2-}$ is unstable by filling an antibonding orbital, it will be offset by filling two electrons into the bonding orbital and it has the same bond order as $\ce{Li2+}$ does.

What am I missing now? 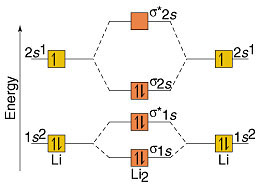 I first thought that $\ce{Li2+}$ is stable, because they don't have paired electrons in $\sigma_{g2s}$, therefore there is no pairing energy.

Adding a second electron to some orbital, would at first double the energy of that bond. But it also introduces some electron-electron repulsion between the two. This however is usually smaller than the gained bonding energy. So the contribution of the $\sigma_\mathrm{g2s}$ contribution in $\ce{Li2}$ is a little less than double its contribution in $\ce{Li2+}$. Please take this last statement with care, because things are more complex than that.

I soon found that $\ce{Li2+}$ is stable, but someone said it is due to the unfilled antibonding orbital. Is this a right explanation?

Because $\ce{Li2}$ is homonuclear, the weight that imposed on each $\mathrm{2s}$ $\ce{Li}$ atomic orbital would be almost the same.

Not just almost. The electronic wave function must follow the symmetry of the molecular structure, therefore the weights of the orbitals have to be exactly the same. But this argument is not really helpful for this question.

Not the answer you're looking for? Browse other questions tagged bond molecular-orbital-theory orbitals stability or ask your own question.