Which are the radicals containing phosphorus in ATP?

You have almost answered yourself completely.

(software generated, in the book there is an example without hydroxy parens: O-({[(2R)-2,3-bis(octadecanoyloxy)propoxy]hydroxyphosphoryl})-L-serine)

(There's no “phosphonyl” if someone wonders, there's however different group with similar name, phosphonoyl $\ce{-PH(O)\bond{-}}$.)

And, I think that the correct layout for the name provided should be rather:
{[(2R,3S,4R,5R)-5-(6-aminopurin-9-yl)-3,4-dihydroxyoxolan-2-yl]methoxy}(hydroxy)phosphoryl phosphono hydrogen phosphate

This name is somewhat overcomplicated. ‘Triphosphate’-based name could be used, see 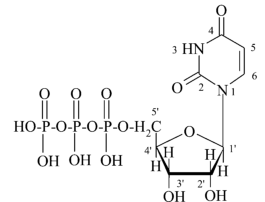 (but this is natural compounds section, which is more permissive)

Seemingly apparent reason why ‘triphosphate’ is currently not used in software generated systematic names is that there's an ambiguity in binding the residue to the first (last), or the middle phosphorus' oxygen (positional isomers), and no numbering system for non-carbonic acids is defined.

However it is defined (P-67.2.2.1), with esters examples (P-67.2.5.2). The numbering is from-to central atoms including the oxygen connectors, so the terminal phosphorus atoms get numbers 1, 3, 5; so (generalized) names for the two isomeric alkyl triphosphates (alkyl on terminal or middle phosphate unit, respectively), are

which might be confusing, especially in the latter case. So this can be the main reason, why these are not used.

It should be OK to omit ‘tetrahydrogen’, as phosphates are ionized in physiological conditions.

(Not speaking of yet better names like adenosine 5’-triphosphate or ATP.)

Not the answer you're looking for? Browse other questions tagged nomenclature esters or ask your own question.

1
Drawing (R)-1,1,2-trimethylcyclohexane
0
What techniques can determine the concentration of ethyl acetate in a solution containing ethyl acetate, acetic acid, ethanol and water?
1
In a condensation reaction, which of the reactants loses their OH group?
11
Which electronic effects are responsible for the reduction of nucleophilicity of a hydroxy group orthogonal to an ester?
1
Naming CHCl(NH2)OH
5
Which side of the C-O-C bond breaks in esters during hydrolysis in basic medium?
3
How to decide at which end to start the numbering of the parent chain when the options for locant sets are the same?