I am not sure I completely understand the bonding in coordination compounds formed by donation of pi electron cloud by the ligands to the central atom. 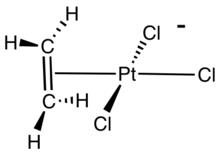 I came across a question which asked the total number of sigma bonds in the salt. I expected the bond between ethene and platinum to be a sigma bond too because it appears as if it is formed by overlap of the orbitals along the axis and hence my answer was 9. But the answer given was 8 and the answer key didn't consider that bond as a sigma bond.

So is the bond between platinum and ethene a $\pi$ bond? If yes, then how?

What orbitals are actually involved in that bond?

The bond between $\ce {Pt} $ and ethene is not purely a $\sigma $ bond and also not a pure $\pi $ bond. The bonding actually consists of a combination of both bonding and back-bonding effect.

If you look into the Molecular Orbital Diagram of Ethene, the picture will be more clear. For the formation of bond between the metal and the ligand, electrons from filled $\pi $-bonding MO of ethene ($\pi_b $) is donated to the vacant orbitals of Platinum. And electrons from the filled orbitals of $\ce {Pt} $ is back-donated to the vacant $\pi^*$ orbitals of ethene. Thus the bonding would have been a $\sigma $ bond if the electrons are donated from a $\sigma_b $ or $\sigma_{nb} $ orbitals. But here the bonding mainly is $\pi $ donation and $\pi$ acceptance ( known as Synergic effect).

Thus, it would be better not to consider the bond as $\sigma $ bond, but may be considered more of a $\pi $ type but also not a pure one due to the back-bonding.

9
In an octahedral complex, what happens to the electrons donated by the ligand?