Why does nucleophilic aromatic substitution occur at C-2 and C-4 of pyridine?

In the following reaction of 2,3,4-tribromopyridine with sodium methoxide in methanol,[1] why are only the C-2 and C-4 bromines replaced with methoxy groups?

Why doesn't the bromine at C-3 also get substituted?

Nucleophilic aromatic substitution on pyridines (or related heterocycles such as quinolines or pyrimidines) regioselectively occurs at the 2- and 4- positions. These can be thought of as being "ortho" or "para" to the nitrogen.

In the mechanism for nucleophilic aromatic substitution, the initial step involves attack of the nucleophile (in this case, methoxide anion) on the π-system of the aromatic ring. Because this step generates a high-energy anionic intermediate which has its aromaticity broken, it is also typically the rate-determining step. In general, the stability of this intermediate is what dictates whether a nucleophilic aromatic substitution is possible or not.

If we consider the resonance forms for this intermediate resulting from attack at each of the three positions, we can understand why attack at C-2 and C-4 is favoured. 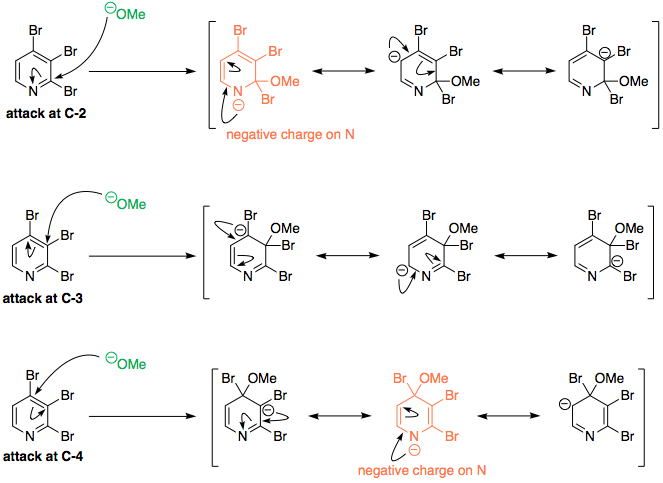 6
Is there any selectivity between the C-2 and C-4 positions of pyridine in SNAr reactions?