Ask Question
Asked 3 years ago
Active 3 years ago
Viewed 2k times
2
$\begingroup$
Closed. This question needs to be more focused. It is not currently accepting answers.

I was trying to understand stereoisomerism. I am having trouble creating a 'flow chart' of Stereoisomerism. While there are many sources available over the internet and books, I don't find a standard answer. Some sources mention conformers and geometrical(cis/trans) under diastereomers while others seperate them completely. According to definition of diastereomers available on Wikipedia,

Diastereomerism occurs when two or more stereoisomers of a compound have different configurations at one or more (but not all) of the equivalent (related) stereocenters and are not mirror images of each other.

While this definition includes geometrical isomers very well into it, not much clarity arises regarding conformers as it used the word configurations rather than conformation.

Also I was finding difficulty in placing Mesoisomers in the chart.

It would be really nice if you could draw the flow chart and post it here.

The problem with looking for information about stereochemistry on the internet is that many sources use outdated terminology, imprecise definitions or have downright erroneous information!

Here's a flow chart that I put together that I believe to be accurate, yet hopefully straightforward: 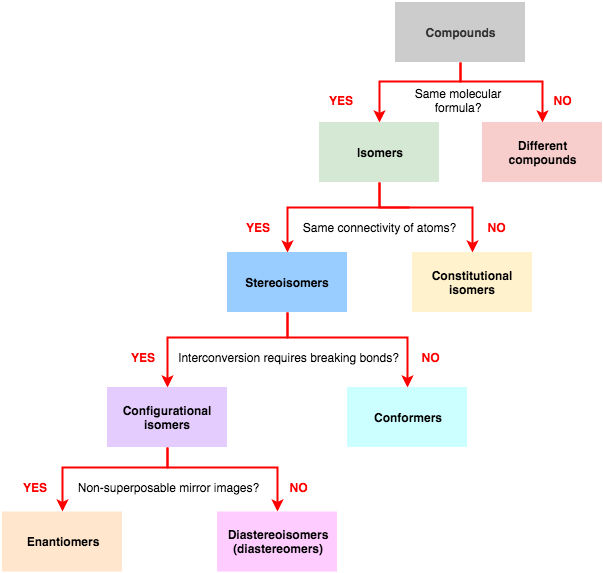 Implicit in the flow chart is that stereoisomers have different 3-dimensional arrangements of their atoms, while having the same connectivity of atoms to each other.

The term "geometrical isomer" is now deprecated and its use is "strongly discouraged". It is an older term for cis-trans isomers, which are just a subset of diastereomers.

A meso-compound is an achiral compound (the mirror image is super-posable), which is a member of a set of diastereomers, where at least one of those diastereomers is chiral. A meso-compound most commonly arises when the compound has two or more chiral centers, yet is not chiral due to an internal plane of symmetry. Meso-compounds don't fit neatly on the flow chart, which is based on comparing two molecules, but are a particular type of diastereomer.