I have been interested in the structure of heating elements/coils used in cooktops. I am referring to something such as in the following picture: 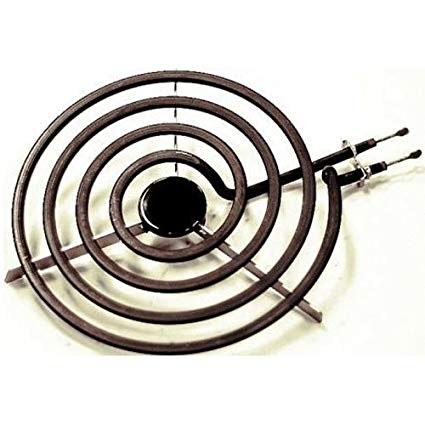 I have a cooktop at home with such elements, and at parts where there was more scraping, I can see a silver-ish colour rather than the black, suggesting the black material is a thin layer around some metal resembling stainless steel, in appearance at least.

I have read on Wikipedia that often such heating elements would have an outer layer made "of stainless steel alloys, such as Incoloy, or copper" (and similar statements elsewhere). This seems to suggest that the silver-ish layer I have seen at the scraped parts in my cooktop is indeed stainless steel. What I am interested in is what the black layer is. My question is why these heating elements appear black in appearance; what the black layer is.

I have a possible guess, which I would also be interested to affirm or negate with you, which is that this is due to oxidation of the metals, which perhaps is done by the manufacturer(s) in advance because they expect that the high temperature that the metal would get to during cooking would itself speed up oxidation and the resulting discoloration, and doing the oxidation in advance (and in a controlled manner which does that uniformly, so the colour seems uniform) prevents that from happening by forming a protective layer of oxidised metal. One reason I am guessing that, is that I looked on Wikipedia at possible oxides of iron, chromium, and nickel, and all of these seem to have at least one oxide with a black appearance. Iron for example has $\ce{FeO}$ and $\ce{Fe3O4}$.

The heating element ( on the inside where you cannot see it ) is Nichrome or similar alloy ( 10 to 20 % Cr, bal. Ni ) . The surface sheath is typically Inconel 601 ( 15 Cr, 10 Fe, 0.2 Al, bal. Ni). They were Inconel 600 ( and maybe some still are 600 ) until the addition of a small amount of Al was found to increase oxidation resistance. There are several similar alloys and there are different names for the same alloy. So the black surface is oxides of Ni. Cr with some Fe. Some compositions and temperature exposure will produce a green tint in the black ( in high temperature furnace tubes of the same family of alloys). Diffraction analyses of the oxides ( from furnace tubes) often do not give specific compositions as Cr, Ni and Fe can substitute for each other.

You are right to think that the oxide is predominantly $\ce{Fe3O4}$ this is a common coating for steels to prevent corrosion and is done intentionally through a process called bluing. Of course with alloys the oxide is impure and there is likely some chromium and Nickel doped in the material as well such as $[\ce{(Ni,Fe)^{II+}(Fe,Cr)^{III+}2O4}]$, but the predominant phase is $\ce{Fe3O4}$ with a posibly small amount of chromite ($\ce{Fe_{2-x}Cr_xO3}$).

Not the answer you're looking for? Browse other questions tagged inorganic-chemistry everyday-chemistry metal materials oxidation-state or ask your own question.

9
Why does Chloride attack CrO?
1
Elemental Silver Colour
3
Forming magnetite on cast iron pan
2
What metal is under the stainless layer when it wears of?
5
Does cold bluing steel prevent rust?
2
Rust removal ended with black oxide on the metal?
1
Forcing a steel pipe to rust completely
5
Boiling sodium hydroxide in stainless steel cup: Solution turning to a blue color