Suppose we have to compare the $\mathrm{S_N2}$ reactivity order for cyclopropyl and cyclopentyl chloride. How can we do that?

I think that cyclopentyl should be more reactive towards $\mathrm{S_N2}$ because of larger bond angle and therefore lesser steric hindrance to the atttacking nucleophile but I am not sure about this.

Also, can the trend be generalised i.e. does increasing ring size lead to faster $\mathrm{S_N2}$?

The rate for each reaction will be determined by the free energy barrier in each case. Cyclopropyl chloride is strained because the carbons "want" to be tetrahedral, with sp3-hybridized orbitals (109° bond angles), but are forced to have much more acute (60°) bond angles within the ring. However, at the transition state, the carbon undergoing nucleophilic attack "wants" to be trigonal planar, with sp2-hybridized orbitals (120°), but is still geometrically-constrained to 60° bond angles within the ring. This makes the free energy barrier for SN2 very large.

Cyclopentyl chloride has bond angles close to the ideal 109°. There will be some bond angle strain at the transition state, but the effect won't be nearly as bad as for the three-membered ring.

Beyond six-membered rings, things get very complicated quickly. You could apply the same approach, but the number of possible conformations quickly rises from 8-membered and above. It becomes difficult to take all the possible factors and conformations into account, so without high-level calculations, it is difficult to make predictions.

There is a literature study[1] on the rates of reaction of cycloalkyl bromides with sodium benzenethiolate [PhSNa] in the aprotic, polar solvent dimethylformamide [DMF] at 0 °C. Bromide is a good leaving group and the thiolate is an excellent nucleophile for an SN2 reaction. You are correct that the cyclopentyl halide is more reactive than the cyclopropyl halide. Indeed, their rates bracket the examples studied by over a million-fold! Why is the cyclopropyl halide the slowest of the group? Well, you said it — bond angle strain. Clearly, the idealized C-C-C bond angle of 120° in the transition state cannot be attained. The rate of the cyclobutyl halide displacement is sped up by the greater C-C-C bond angle by a factor of ~10,000 relative to the cyclopropyl system. 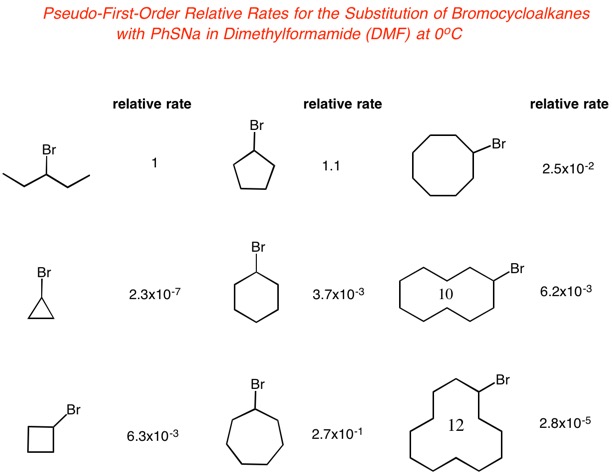 At first sight cyclohexyl bromide might be expected to have the fastest rate because the C-C(Br)-C bond angle is ≈112°. However, steric factors now come into play. The chair conformation of bromocyclohexane having the equatorial C1-Br bond has a pair of axial hydrogens at C3 and C5 that impede the attack of benzenethiolate. The observation[3] that cis-4-tert-butyl-1-bromocyclohexane (axial C-Br) reacts with benzene thiolate in aqueous ethanol 58 times faster than with its trans-counterpart lends credence to the reaction proceding through the chair conformation having the axial C-Br bond, thereby avoiding steric issues incurred with the equatorial C-Br bond.

Bromocycloheptane has a C-C-C bond angles of ≈115° that facilitate a favorable TS but this benefit is countered by the onset of transannular steric factors. Nonetheless, this displacement is ≈100 times faster than the cyclohexyl example. Steric transannular effects come into serious play in the cyclooctyl, cyclodecyl and cyclododecyl ring systems. In summary, bromocyclopentane reacts the fastest of the cycloalkyl bromides having the best balance between angle strain and steric factors. With bromocyclohexane as some what of an outlier, steric factors dominate in rings greater than 5-membered, while angle strain prevails in rings smaller than 5-membered.

I am not an expert in chemistry, so please correct me if I am wrong.

29
Why are DCM and chloroform so resistant towards nucleophilic substitution?
3
Does pressure affect non-gaseous reactions?
5
Order of reactivity of carbonyl compounds towards nucleophilic addition
0
Reactivity order in hydrogenation reaction of but-2-yne and butene isomers
13
Are carbocations necessarily sp2 hybridized and trigonal planar?
1
How do quaternary ammonium salts catalyse SN2 reactions?
2
Are SN2 reactions in equilibrium?
4
When is donation into an anti-bonding MO stabilising?