Why are the calculated NMR values on the DFT & GIAO level of cyclopentane-1,3-dione so far off?

I've been using Gaussian 16 via the guidance provided by Dean Tantillo's group at UC Davis, the chemical shift repository (CHESHIRE) in particular first performing molecular structure optimization at some level (e.g. B3LYP/6-31+G(d,p)) and then calculating shieldings (at mPW1PW91/6-311+G(2d,p) with solvent corrections, scrf=(solvent=chloroform, smd)). But I keep getting shielding values that are radically off.

In particular, regardless of the settings I arrive at isotropic shielding values for classes 1, 2, 3, of ≈-34, ≈136, ≈144. Now of course observed chemical shifts and shieldings are often related by a linear scaling, per the Tantillo group's work (and others), which means that it's very odd that classes 2 & 3 here (the non-Oxygen-attached carbons) have nearly identical shielding values.

I am new to chemistry and DFT methods, so I worry I might be something wrong, but it might also be the case that this is just a "hard" molecule for DFT methods to get right. I wanted to know:

The computational results given below indicate that there is something inherently problematic with this seemingly simple system.

Full optimizations and corresponding harmonic vibrational frequency computations of cyclopentane-1,3-dione was were at two levels of theory:

Each optimized geometry was subjected to GIAO-NMR computations at the following levels of theory:

The NMR levels of theory were chosen specifically to look at basis set effects as well as implicit solvation (SMD) effects. The solvent chosen was chloroform.

All computations were carried out using the Gaussian 09 software package. All DFT computations employed an ultrafine integration grid. The frozen-core approximation was invoked for the MP2 computations.

Table 1 presents the absolute isotropic shielding constants ($\sigma\ce{C}$) as well as the computed chemical shifts ($\delta\ce{C}$; determined using Equation 1 given by Martin in the comments) with all values given in ppm. The carbons are labeled in figure 1 for cyclopentane-1,3-dione. Despite the level of theory used for the optimization or NMR computation, the $\delta\mathrm{C}^2$ values are consistently off by ≈50 ppm with respect to the 'experimental' values obtained from equation 1. 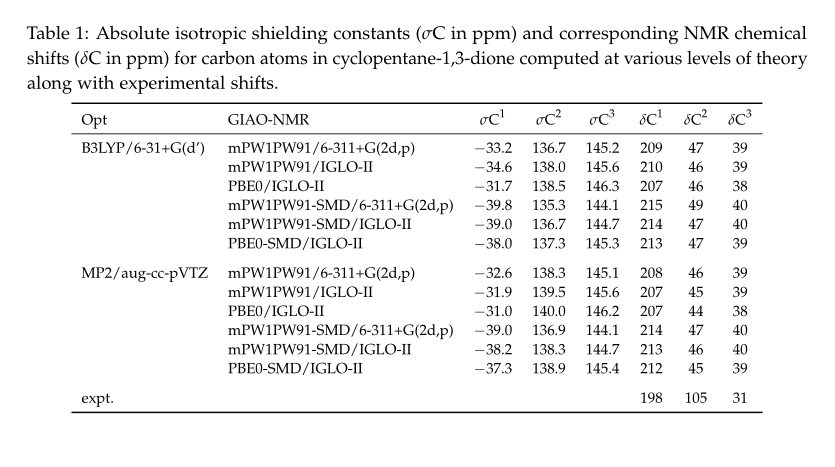 I am actually quite surprised by these results as I did not expect this system to be difficult to characterize with straightforward NMR computations.

Not the answer you're looking for? Browse other questions tagged computational-chemistry nmr-spectroscopy density-functional-theory or ask your own question.

10
When using Gaussian to calculate NMR, what's the default solvent and frequency?

0
Identifying protons in NMR using the J values
14
Calculated 13C NMR Shifts of brominated Carbons
17
Correlation between 1H and 13C shifts - coincidence or not?
4
Why are there so many DFT Methods?
3
How are imaginary frequencies and force constant calculated by DFT?
13
Strange "far out" orbitals in HF and DFT calculations. Why do they occur?
1
Why does DFT-D finds different optimized geometries for the same structure when using different input geometry files?