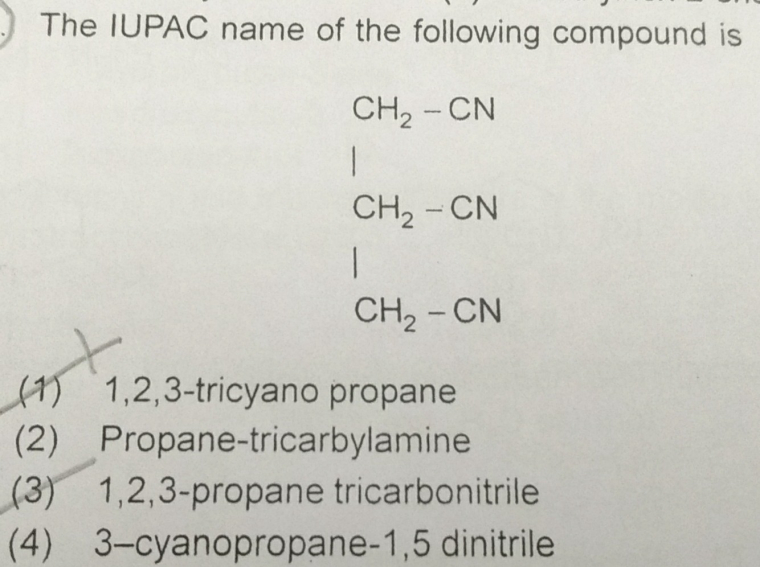 here since Only CN group is present, it is the major functional group. In this molec. we cannot have a chain which has carbons of all CN group. hence in such compounds we do not take any carbon of cn in the parent chain.so answer should be 3. but few books and many reference texts are showing name as option d.

The IUPAC rules do not seem to have an explicit rule for general cases when more than two cyano groups are attached to the (linear) alkane chain, like it does for aldehydes (see Is propane-1,2,3-tricarbaldehyde the correct IUPAC name of CHO-CH2-CH(CHO)-CH2-CHO?), but do have a related one:

P-66.5.1.1.2 If an unbranched alkane is linked to more than two terminal cyano groups, all cyano groups are named from the parent hydride by the substitutive suffix ‘carbonitrile’, preceded by appropriate multiplying prefix and locants. Example:

(Three examples follow, two of them have another higher-priority group $\ce{-COOH}$; the other one has three cyano groups, not on linear chain but one of them is attached via a chain branch, $\ce{NC[CH2]2CH(CH2CN)[CH2]2CN}$, 4-cyanomethyl(heptanedinitrile).)

I our case, we can express all the groups as principal characteristic group, so the correct name should be propane-1,2,3-tricarbonitrile.